“A month and a half ago, I was fired from Vogue. It took them three minutes to do it” 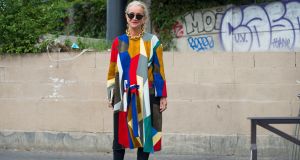 Hell hath no fury like a fashion editor fired. At the couture shows in Paris this week, the front row was abuzz — both conversationally and electronically — with news of an incendiary interview with Lucinda Chambers, the former British Vogue fashion director, that was unusual in its frank criticism of the 21st-century fashion ecosystem. Soon after its publication, however, and amid talk of legal action, the piece was taken down, only to sensationally resurface again less than 24 hours later.

First published Monday in Vestoj, an annual academic journal about fashion, the first-person account charted Chambers’s abrupt departure from British Vogue in May, as well as the broader brutality of the fashion business and the apparent power that heavyweight advertisers have over magazine publishers.

The article was removed from Vestoj’s website the same day it was published, and no reason was initially provided. But multiple screen captures and photographs of its contents continued to be widely circulated, testament to the fact that in the world of social media, nothing really disappears, and to the singularity of a fashion-industry insider breaking ranks and shedding a negative light on the internal machinations of the sector.

Even the chairman told me he didn’t know it was going to happen. No one knew, except the man who did it — the new editor

“A month and a half ago, I was fired from Vogue,” Chambers told Vestoj’s founder and editor-in-chief, Anja Aronowsky Cronberg, referring to her removal by Edward Enninful, who was hired to replace the longtime editor-in-chief, Alexandra Shulman, in April.

After conceding that the fashion industry could “chew you up and spit you out,” Chambers went on to criticize some of the “crap” magazine cover shoots that she had produced (saying the blame lay in part with Vogue’s allegiances to major advertisers), and the mismanagement of the fashion brand Marni, where she had once worked. She also suggested that Vogue had become an increasingly uninspiring read.

The clothes are just irrelevant for most people — so ridiculously expensive

“Truth be told, I haven’t read Vogue in years,” she said. “Maybe I was too close to it after working there for so long, but I never felt I led a Vogue-y kind of life. The clothes are just irrelevant for most people — so ridiculously expensive.”

“What magazines want today is the latest, the exclusive,” she continued. “It’s a shame that magazines have lost the authority they once had. They’ve stopped being useful. In fashion, we are always trying to make people buy something they don’t need. We don’t need any more bags, shirts or shoes. So we cajole, bully or encourage people” into buying.

Many industry power players in Paris were tight-lipped after the article was published, including Enninful, who said he had “no comment” about the interview as he sat in the front row of the Chanel show Tuesday. An hour later, Condé Nast, the publisher that owns the Vogue titles, released a short statement that contradicted Chambers’ account of the end of her employment there.

“It’s usual for an incoming editor to make some changes to the team,” the statement said. “Any changes made are done with the full knowledge of senior management.”

Dozens of readers, meanwhile, were quick to praise Chambers’ candor. Her profile outside the sector increased after her star turn last year in “Absolutely Fashion: Inside British Vogue,” a BBC documentary in which she won legions of fans thanks to her upfront approach, artistic vision and eccentric yet elegant fashion sense.

Julie Zerbo, of the website the Fashion Law, looked beyond the reader reaction and to the possible legal fallout, wondering on Twitter if Chambers might be sued.

And then at lunchtime Tuesday, the tale took a further twist when the article reappeared online.

“Due to the sensitive nature of this article, we took the decision to temporarily remove it from the site, but have now republished it in its entirety,” Aronowsky Cronberg explained in an email to The New York Times.

“In terms of the reasons why it was removed, they are directly related to the industry pressures which Lucinda discusses in her interview,” she continued. “As you know, fashion magazines are rarely independent because their existence depends on relationships with powerful institutions and individuals, whether it’s for tickets to shows, access in order to conduct interviews or advertising revenue.”

“We created Vestoj to be an antidote to these pressures, but we are not always immune,” Aronowsky Cronberg added. “We hope Lucinda’s republished interview will spark a discussion which might, in her words, lead to a more ‘empowering and useful’ fashion media.”

Irishman in Sweden: Covid-19 testing is not widespread here
2