Fashion Forward: Deirdre McQuillan and Dominique McMullan round up this week’s fashion news and style tips 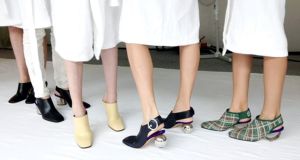 A young Irish designer to watch is Katie Ann McGuigan from Newry who made her debut at London Fashion Week having won a Fashion Scout Merit Award to show her 18-look collection for autumn/winter 2017.

Her intriguing collection inspired by Michal Chelbin’s photograph of life in Ukraine alongside Donald Judd’s primary colour installations was a tour de force of digital print and laser-cut fabrics creating different textures and colours for her draped A-line silhouettes.

Men’s workwear and fastenings and other construction elements demonstrate her close attention to detail and finish. She will be showing again at London Fashion Week in September and in the meantime is moving to a bigger studio in London and developing a team to build her brand. Watch this space. DMcQ

Alan Kelly, menswear buyer at Avoca, is making his mark attracting what he calls “accidental male shoppers” out for the day strolling around the shops with their newborns, partners or inlaws and coming across attractive shirts, jackets or jeans at affordable prices.

“It takes the pain out of shopping and decision-making when shirts start at €39.95 and jumpers at €49.99,” says Kelly. Well-known for his Gentlemen Please boutique in Blackrock which he ran successfully for a decade, he is now bringing his buying expertise and skills to the Avoca group with best-selling labels like Selected from Denmark and Scotch & Soda from Holland.

The jeans on offer come in four colours – light and dark denim, blue-black denim and grey, while Sixth Sense, an Irish brand from Westport, has a “fantastic fit”. Colourful shirts include organic brands like Knowledge Cotton Apparel and Thought. “New customers are well informed and have a little more interest in what they buy and where it comes from,” he says. DMcQ

Visitors to Brown Thomas in Cork will have their last chance to see the Céline pop-up shoe collection this weekend showcasing spring/summer footwear with its mix of heels, flats and trainers.

The designs include striking red and white leather glove booties along with a mirror blade heeled mule in black calfskin while flats come in soft moccasin studded loafers in black and pale blue with plimsoll lace-up trainers in white and red canvas. The pop-up runs this weekend until Monday, April 3rd, before sprinting off elsewhere. DMcQ

Give Mum the evil eye with these 18ct yellow gold-plated turquoise evil eye drop earrings for €91 from Selfridges.com or these sapphire and rhodolite earrings for €2,632 by Ileana Makri at brownsfashion.com.

Treat Mum to some serious comfies with these Yawn Chambray pyjamas, priced €109 at Arnotts.

“Over the years I have come to learn that style is very much an individual thing. When I look at women like Iris Apfel and Vivienne Westwood, for example, they wear so well exactly what they want, regardless of their age and what people may think of them. I say that there are no rules and it is such a relief! In the end, if the person is confident and comfortable in her/his attire, wearing it like a second skin, then it will just show and exude style of one kind or another.” – Sophie Rieu, designer