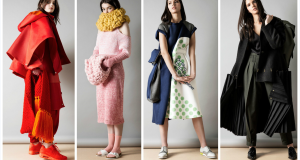 Striking graduate designs in red with a heavy scarf by Zoe Redmond, knitwear by Aisling Duff, a casual split-colour outfit by Eavan Butler and beautiful pleating from Nino Sanaia 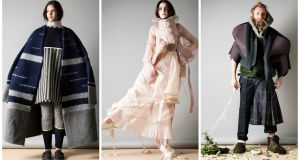 This year a record number of fashion students – 64 in total – will graduate from the two main colleges in Ireland, 37 from NCAD and 27 from LSAD. The NCAD year not only promises to be exceptional in terms of sheer numbers – twice as many as last year – but also outstanding for the breadth of its creativity and talent.

“There is a natural competitive edge this year because it is such a big year and some have stepped up to the plate and embraced it doing slightly smaller collections and focusing on their strengths and core ideas,” says Angela O’Kelly, NCAD’s head of fashion.

Recent NCAD graduates Michael Power works in Lanvin in Paris, and Carla Murphy and Fionn Dubhaill work in Gucci in Florence. Others go abroad to continue their studies at Central St Martins or the RCA in London or are absorbed into big international companies. A few take the plunge and set up on their own like Caoimhe MacNeice, Alan Taylor and notably Simone Rocha.

Many of this year’s students question ideas of masculinity in dress like John Burrows and Conaill O’Dwyer, the latter handknitting jumpers and ties with plastic bags while Paulina Stanczyk investigates military uniforms as does Nino Sanaia with her native Georgia, while Kate McGowan deconstructs the typical gear of cowboy westerns.

Others look to the powerful work of Frida Kahlo, Egon Schiele, Sylvia Plath and Haruki Murakami for conceptual frameworks. Unlike previous years, there are not many references to fashion stars such as McQueen or Westwood; instead a considerable number of students – Laura Egan, Niamh Kearns, Lina Sarhan, Ailbhe Griffin, Zoe Redmond and Kitty Doyle – look to their own childhoods, backgrounds and personal experiences for starting points.

Jenny Drea brings her particular experience as a model and of numerous work placements to her collection exploring the role of a model within the design process while JJ Donnelly’s involvement in hunting and Lucy Bowen’s sailing prowess inform their creations.

Sportswear kicks to touch in collections from Eavan Butler and Roisin Fagan while the incursion of the industrial into the natural environment drove the subtle ideas and knitwear from Pearl Reddington. Her felt coat took 55,900 stitches and 9kg of yarn to create, another example of an overall emphasis on handwork throughout.

All have gained valuable experience working as interns – with local designers such as Louise Kennedy, Helen Cody, Claire Doyle, Aideen Bodkin, Jill de Burca and John Rocha and with Banana Republic, Proenza Schouler and Lanvin in New York, Sass & Bide in Sydney, House of Holland, Simone Rocha and Danielle Romeril in London. Others have done stints in retail – in Cos, Marion Cuddy and Penneys.

According to Linda Byrne, lecturer in fashion at NCAD, many of the collections are deliberately not gender-specific and deal with questions like sustainability and the environment along with social issues like mental health. But will MAs fast-track so many talented young graduates into the industry?

“I think we give our students a broad basic education which allows for diversity when they graduate. So some may become fully fledged designers, others technicians within companies, and others stylists, photographers or fashion journalists. They are looking towards more niche areas where they can realise their passion for something. Diversity in fashion is hugely important at the moment,” she says.

The NCAD shows will take place in the carpark of the Westbury Hotel on May 10th, one at 4pm and the other at 7pm. For tickets, visit ncad.ie. Shelly Corkery, womenswear director of Brown Thomas, a key sponsor of the show, will also present one of the graduates with a €4,000 bursary and a mentoring programme with the management team. The collections of this Designer to Watch will be installed in the store at Create in July.