Fashion: how to dress the part

Three image-aware young actors pick their favourite look, then Deirdre McQuillan gets a top stylist to give them an alternative 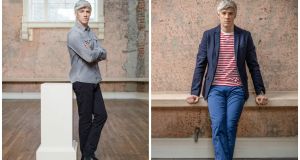 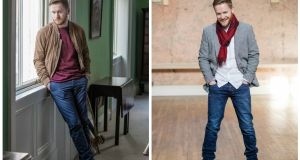 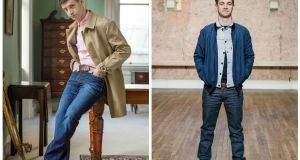 As every actor knows, clothes have the power to transform, outward appearance being a key to character. We spoke to three young actors shortlisted for the Audi Dublin International Film Festival Discovery Award about self-presentation – and asked them to describe their personal style.

Each was asked to select one outfit that reflected their taste and style, while another – sometimes very different – outfit was chosen by stylist Grace Moore.

Valerie O’Neill, menswear buying director of Arnotts, was interested in both the styles and contrasts that emerged.

“They all loved what Grace put them in, clothes they would never have chosen themselves.

“Their outfits liven up with pops of colour. They tend to be safe in their choices which is very typical of Irish men but it is about time Irish men looked at colour a little bit differently and be a little bit more adventurous when there is so much on offer.”

O’Neill says that the variety is out there – as long as men are willing to seek it out.

Emmet Kirwan, an actor and playwright, is the author of Dublin Old School for which he won a Best Performance Fringe Festival Award. He also wrote and starred in the RTÉ comedy series Sarah and Steve. He is currently playing Charlie Bentham in Juno and the Paycock at the Gate Theatre.

“I am a bit of a labels man. I am a bit mod and I like anything that is clean and slick. I like labels like Fred Perry and Lyle & Scott and am very clear about my choices, I would never be a Penneys man. One of my favourite shops is Rebirth of Cool (a landmark “mod” shop in Temple Bar) and they do great long coats, Harrington Baracuta jackets and three-button T-shirts. I am a keen shopper and like Farah in Arnotts for fitted shirts and slacks, but I am not into whacky prints or polka dots and I only wear ties with a suit, preferably a 1960s-shaped one like those at Ben Sherman. Joan Bergin has designed my costumes for Juno – two 1920s-style suits that have been made for me and which I wear with a cane and gloves.

“A man in modern clothing tends to slouch a lot because of wearing jeans, jumpers and runners, so there is a casualness to our everyday dress which feeds into our posture and manners. When you wear a suit you tend to stand up straight and hold yourself better and people treat you differently. People in the 1960s, despite hard times, were interested in nice hair, Italian suits, in looking good and I just like anything like that that makes you look smart and clean. I usually layer at this time of year and like Levis 511s – they are the most popular jean with a tapered leg and not too skinny. I used to wear a lot of old-school tracksuit tops but I stopped because you get to an age where people don’t take you seriously if you wear them. First impressions are everything – it’s a snap decision that people make and it takes a long time to modify that impression. I dress the way I like.”

Actor, musician, singer, Garda, Kieran O’Reilly is probably best known for his role as Det Garda Ciaran Madden in Love/Hate and more recently in the RTÉ drama Rebellion as Capt Robert Barton. He is also the lead vocalist with the Irish rock band, Hail the Ghost.

“My style is monochrome, low key with very dark and sombre colours and I suppose urban. I feel more confident in black and sometimes it is quite bland and feels not very creative, but it is easy. I like layers, scarves, hats, boots, jackets and the right jeans.

“I have been bold with shoes, like a pair blood-orange brogues from Topshop but that is as adventurous as I have gone.

“I watch people in the street and glean ideas from them; how they tie scarves, for instance, affects an outfit, breaks it up. I like wearing thin jeans and it took time to feel comfortable in them, but I am in a rock ’n’ roll band and I think I should look the part.

“I did buy a suit recently, a brown and burgundy one in Arnotts for my wedding, and I wear the jacket with other things.

“I still think I am fairly clueless when it comes to fashion, but I am a very visual person and originally planned to be an artist.

“ I think my personality is a little bit mad, but my clothes are saying that I am safe.”

Best known for his role as Deano in Love/Hate and more recently Derek in Game of Thrones, Ian Lloyd-Anderson is currently rehearsing for the lead role of Jack Clitheroe in the Abbey Theatre’s production of The Plough and the Stars, opening on March 6th.

“My style is very mixed. I could rock around town in jeans, runners and a T-shirt , but at the weekend maybe a suit or a shirt and blazer with jeans or black trousers. My latest purchase is an All Saints green overcoat for which I paid more than I would normally spend, € 500, but it is something that will last. My style changes all the time though my wife says it has improved, and if I am buying more expensive clothes such as a good jacket, coat or shoes I would do it with her because she has such a good eye. I would be more interested in clothes than I would let on as I like to look good and what people wear says a lot.

“I always feel I am a year behind fashion and since I got married I feel I am dressing more like my dad. I am fussy about watches and got an Armani one from my wife when we got married and I now have a collection of 20 including an old one belonging to my grandfather which is very cool and got me interested in the first place. I now change them as regularly as my underwear. ”

Michael Harding: How I learned to stop worrying and love my enemy
10