Say bye-bye to convention and deck yourself out with bold, check patterns and tweed 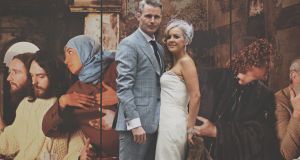 Sharp couple: Derek and Zoe McGrath at their wedding in Dublin 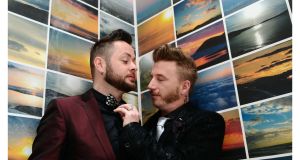 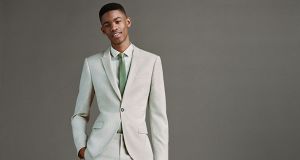 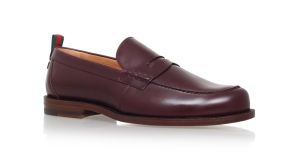 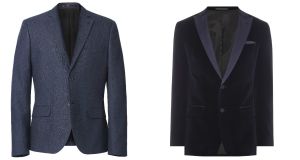 When Dubliner Derek McGrath got married last year, he wanted something different to the standard blue wedding suit. “I wear suits every day for work Monday to Sunday day in day out, navy or grey, so for my big day I wanted something different. It was my second time around and that had a part to play as well. The first time was a black-tie rental. But between the jigs and the reels I still wanted a classic fit,” he says.

His bold, blue-check suit complete with double-breasted waistcoat was made by Louis Copeland with the encouragement of Zoe, his bride-to-be who loved it. “I was a bit sceptical at first and was worried about the Paddington Bear effect, but she went for it straightaway and I would have regretted not getting it.” The three-piece set him back €1,000 but since then he has worn it to another wedding, to the races at the Curragh and the jacket has been teamed with jeans and chinos, so for McGrath, it has been an investment. “For me it was going to be the one time I would get something made to measure and the extra few bob was worth it.” After all, the bridal dress, usually a major expense, is only worn once.

Dress codes for men are changing and a big day out is a big de   al, though most attention has always centred on the bridal outfit. Most grooms rely on the safety of the blue suit (with brown shoes) or the tuxedo, but others are becoming more adventurous.

Many “cool” grooms wedding commentator Sarah Geraghty encounters are opting for custom-made suits with tweed being particularly popular – from either Louis Copeland or Magee. “My overwhelming observation, however, is that grooms remain quite traditional and I am surprised at how many rent the old-fashioned, three-piece with the shiny waistcoat and tie. Most are loyal to local retailers like Galvins in Tullamore, Martin Feeny in Galway or Tom Murphy in Cork,” she says.

Many same-sex male couples opt for similar tuxedos where one wears a tie and the other a bow tie, according to dapper man about town Darren Kennedy. “I think they stick to safe outfits to keep it grounded because often they are in orthodox places and it counteracts conventional expectations that they will do something different,” he observes. A “cracking” suit is what matters in his opinion “and a wedding is the opportunity to get your first bespoke suit for a lot of guys. It is an investment, but make sure your shoes are polished and invest in a really good-quality shirt,” he advises.

Michael Barron and Jamie Nanci, a same sex couple who married in South Africa chose brightly coloured suits which they bought the day before in Capetown that matched the informality of the occasion. “My suit was burgundy wild silk and very African while Jamie wore silver pants and a patterned black jacket. We were more interested in getting married than worrying about what we would wear, but it’s exciting to mix things up,” recalls Michael.

Being aware of the visual element of a wedding means that a savvy groom can carefully orchestrate a top notch rigout that not only fits him perfectly but one in which he looks great standing up or sitting down and just as talked about a dude as his decorative partner. Accessories are key to making an impact - the spotted or striped bowtie, the tassel loafers - or Converse trainers - catch the eye along with others details like a shawl collared or velvet jacket, cool shades and a buttonhole.

Good groom guidance is one of Louis Copeland’s well polished skills and one of the discreet elements that he offers - depending on the client - is embroidering the initials or monogram of the bride and the date of the wedding on the inside of the groom’s jacket collar or lining the back of his waistcoat in colours that match those of the bridal outfit. Whatever about dress codes, making it special from cut to collar is ultimately what counts as does good grooming in every sense.

‘I’m lonely during lockdown and looking for casual sex. How do I do that safely?’
5