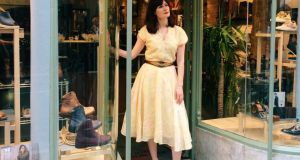 Next Saturday fashion historian, writer and blogger Ruth Griffin will be conducting one of her final Lost Fashion Tours of the summer 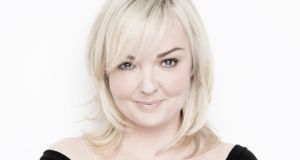 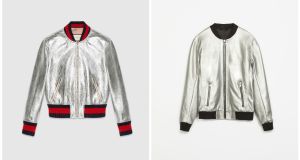 Light up the room in this men’s bomber for €59.95 from Zara (right) or shine bright like a diamond in this metallic bomber for €2,500 from Gucci (left). 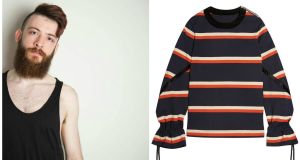 Create a defining style like Lorcan Devaney, or try this cotton-jersey sweatshirt from Sacai for €580 at net-a-porter.com

MAKING IT UP AS SHE GOES

Zoe Clark is one of Ireland’s leading make-up artists with a client list that reads like a Who’s Who of celebrities from Mariah Carey to Nigella Lawson, Enya and the Spice Girls. “No matter what you’re wearing, people talk into your eyes,” she says. Much sought after for her ability to flatter any client’s looks no matter what age or style – particularly for weddings – she is now installed upstairs in the Kazumi hair salon on Molesworth Street in Dublin with introductory offers of €50 for make-up (without lashes, €60 to include lashes) and €30 for eye make-up application. She does individual make-up lessons too. zoeclark.com

Light up the room in this men’s bomber for €59.95 from Zara or shine bright like a diamond in this metallic bomber for €2,500 from Gucci.

A very special fashion show by designer Helen Cody will be held in Christ Church Cathedral, Dublin on September 6th, the first to be held in the main nave of this sacred place. The show will be her first couture catwalk collection in eight years, staged in aid of St Francis Hospice and has taken six months of planning. The event will include the couture show, music from the Daz McAleese jazz trio – and a surprise performance may make it a night to remember. The a/w couture show starts at 8pm with a champagne reception at 7pm and tickets are €50 from St Francis Hospice (sfh.ie); Costume Boutique, Castle Market and Havana, Donnybrook.

“I tend to very much stick to a kind of personal uniform; in that I only ever wear black. It creates a defining ‘style’ for me and allows me to play with different looks within that style.”

Next Saturday fashion historian, writer and blogger Ruth Griffin will be conducting one of her final Lost Fashion Tours of the summer in Dublin city centre. Her original and popular tour called the Lost Fashion History of South William Street, which uncovers its hidden style secrets, will run from 11am to 1pm. She will also be conducting two further tours on October 1st and 8th; one on Merrion Square and a special Lost Gentlemen’s Fashion Tour of Grafton Street, which will take in the tailors and establishments past and present from milliners and tailors, to cigar and watchmakers dotted around the area across the centuries. Tickets are €12 and for further information on the tours and to book, you can visit ruaruth.com/lost-tours-2016

We’re digging the rope detailing on the sleeves of this striped cotton-jersey sweatshirt from Sacai for €580 at net-a-porter.com