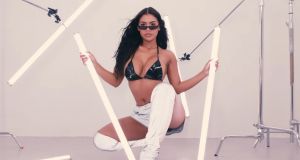 The online fashion retailer Pretty Little Thing, whose target market is teenagers and young women, has been banned from showing an “irresponsible” YouTube advert that portrays women “as sexual objects”.

The advertisement starts with a woman in black-vinyl chaps-style knickers looking over her shoulder seductively before showing other women, including one in a mesh bodysuit, in “overly sexualised” poses.

Pretty Little Thing, which is based in Britain but sells clothes around the world, including through its Irish website, told the UK Advertising Standards Authority that the advert promoted diversity through “bold and distinctive fashion of all shapes and sizes” and that the company always aims to promote “a healthy body image that was inclusive and empowered women”.

The authority rejected its argument, agreeing instead with a viewer who had complained that the advert, which was shown on YouTube in October last year, was irresponsible, overly sexualised and liable to cause offence. Pretty Little Thing cannot show the advert again in its current form.

Another of the company’s ads was banned in the UK in 2017 after the authority ruled it was irresponsible for portraying models who appeared to be under 16 in a sexual way.

The authority said it knew that the term “nude” was often used in fashion to refer to clothes and make-up in skin-tone colours, and that the advert had been for a range of clothes in nude tones, but “Send nudes” was more likely to be taken as a harassing request for sexual photographs.

“Increased pressure to share such photos had been linked to negative outcomes for young people,” it said, adding that the emails had probably reached children, especially those who wanted to dress like a “slightly older age group”.

Boohoo said after the advert was banned that it recognised its obligations to ensure its advertising was socially responsible.

The more the British learn about Ireland’s loyalists, the less they like
5

Election 2020 in commuterville: ‘They built the houses and left the people in a vacuum’
8