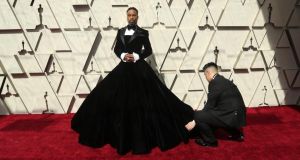 Billy Porter is a singer, actor and man of fashion. He is also a man who isn’t afraid to wear a skirt. Porter wore a tuxedo dress to this year’s Oscars and rocked a very fabulous, very pink, uterus-inspired suit-gown to the Tony awards.

Not everyone can pull off an upcycled velvet curtain, but it is a shame more dudes don’t try. As Porter told Stephen Colbert during an appearance on The Late Show, on US television, men’s clothing norms are mired in misogyny.

“Women wearing pants is powerful,” the 49-year-old said. “It’s strong, everybody accepts it and it’s associated with the patriarchy.” However, “the minute a man puts on a dress, it’s disgusting, so what are you saying? Men are strong, women are disgusting? I’m not doing that any more… If I feel like wearing a dress, I’m gonna wear one!”

If I Wanna Wear A Dress, Then I Will, And That Will Set The New Wave...
-JADEN SMITH #ICON

It is sad that so many men are petrified about seeming effeminate. It is sad that it is not socially acceptable for men to experiment with fashion in the same way women can. Happily, however, things are changing gradually. No one looks twice at a guy with a man bun or a man bag any more; men’s make-up is a growing industry; and male rompers were a thing for a while.

Although men in dresses are still considered noteworthy, guys such as Porter are sashaying into the mainstream. The rapper Young Thug is fond of skirts and the actor Jaden Smith frequently and unapologetically wears dresses. “If I Wanna Wear A Dress, Then I Will, And That Will Set The New Wave,” Smith wrote on Twitter last year.

Meanwhile London fashion week featured so many men breezing along in gender-fluid fashion that GQ proclaimed: “2019 is the year men will start wearing skirts.” I certainly hope so. Masculinity is a straitjacket. It is high time more men broke free. – Guardian

Four fine rosé wines worth paying a little extra for
9