Dig in: Be sure to stick some flowers on your face 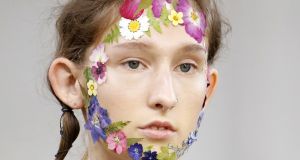 Oscar Wilde did it when he popularised the wearing of the floral boutonniere. Mexican artist Frida Kahlo did it when she decorated her hair with fresh flowers picked from her garden. And the model Twiggy did it when she appeared on the cover of a 1967 issue of Vogue magazine with the image of a vivid lilac flower delicately hand-painted onto her face in an evocation of ’60s flower power if ever there was one.

But it’s only this year that the wearing of flowers has reached new fashion heights with the advent of floral make-up. By which I mean real flowers – dried rose petals, forget-me-nots, cornflowers, daisies – delicately glued on to models’ faces (including their lips, ears and eyelids) with the use of eyelash glue.

“Face flowers”, you see, are one of the most talked about “looks” of this year’s couture fashion shows: Vogue, Elle, Grazia and Marie Claire are just some of the fashion magazines that have carried extensive features on the trend in the past few weeks. It all started when a New York make-up artist by the name of Violette decorated Ford model Tyg Davison’s face with flowers for a photo shoot so that they appeared to be tumbling (poetically, of course) out of the corner of her perfectly pouting lips.

Other make-up artists soon followed suit. And then, a few weeks ago, the fashion world went wild when make-up artist Val Garland used a range of dainty, dried flowers in vivid hues of sky-blue, ruby, violet and lemon to delicately embellish the faces and necks of runway models at the Preen SS17 show.

So the next time that you wonder idly whether that shade of lipstick is just a little old hat or mentally debate the merits of liquid eyeliner, ask yourself whether something far more radical is required: couple of jaunty daisies glued to the nose perhaps or maybe a few violas in place of eyeshadow.

But if that all sounds just a little too extreme, then perhaps you could instead embrace another new, botanically-inspired fashion trend, by which I mean “living jewellery”. Because necklaces, rings, earrings, bracelets, brooches and headdresses made out of fresh plant material (especially succulents) are another big “thing” in the fashion world at the moment, as exemplified by the exquisite work of the Michigan-based designer PassionFlowerSue, whose Instagram page is filled with sumptuous images of her work. Anyone for a pair of echeveria earrings?

Before you buy an e-scooter for Christmas, read this
Real news has value SUBSCRIBE