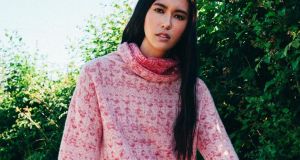 Leading stars at this year’s Create at Brown Thomas will be knitters – Irish designers who are reinventing a traditional native craft in their own particular modern ways.

Led by Lainey Keogh with her most colourful and vibrant collection to date, all stripes and flowers, and Pearl Reddington, recipient of the first RDS Craft Award of €10,000, the others include Faye Dinsmore who is becoming an activist finding new ways of promoting handknitting in her native Donegal and Fintan Mulholland from Belfast whose sculptural forms marry technology and creativity in innovative ways. “Knitwear has risen to the forefront of fashion for autumn/winter,” says Shelly Corkery, BT’s director of women’s wear.

A poncho by Mulholland, for example, is a no-seams, one-piece knit taking its inspiration from the neolithic Celtic symbol of the Triskele and its twisting lines, “so the idea is that the piece of knit looks like it is never ending – though it is hard to knit on the machine and is more maths than creativity before you even start – working out pattern, tension and sizing, so I plug myself in and off I go and I am not thinking about what goes where”, he says. His nine styles, geometric and symmetrical cardigans and sweaters, come in natural colours with wool that is locally sourced as well as alpaca, silk and mohair from Italy. Sustainability is at the core of his work.

Faye Dinsmore’s proudest ambassador is her husband, Paddy Cosgrave, who is regularly photographed in one of her Donegal handknits which he has in all colours – there is even one of him taken outside Number 10 Downing Street wearing an oatmeal version. Her collection of cardigans, hoodies and sweaters for Create is completely handknitted and finished by her “flock” of knitters, mostly older women scattered around Donegal.

Each item comes with a little booklet telling the story of where it was made and what the patterns mean. She points out that each piece takes 40 hours to complete and one called “The Priest” in black wool is a copy of one the knitter made for her local curate. Dinsmore plans to set up a summer school so that threatened skills can be preserved and passed on from one generation to the next.

The €10,000 RDS Craft Award will enable Pearl Reddington to expand further her growing knitwear business and experiment with new techniques like intarsia creating more abstract patterns with multiple colours. Her seven styles of jumpers and cardigans showcase her geometric approach and signature colours of grey, navy and neon yellow in merino lambswool for extra softness.

Handcrafted on a machine in her little garden studio in Dublin, it is a trans-seasonal collection that includes wraps, scarves and pompom hats. For the first time she is including screen printed linen trousers from Emblem Weavers in Wexford to complement the knit.

These makers who transform fibre into fashion have creative talents using hand or machine – or both – and show that knitting is now as much about technical as it is about design and artisanal skills. That appealing sweater is a lot more complex than you think. Create runs at Brown Thomas from July 3rd for six weeks.