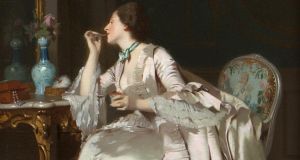 Danish-born Ib Jorgensen – the couturier-turned-art-dealer – was one of Ireland’s most renowned fashion designers in the 1970s and 1980s. He came to public attention with his striking uniforms for Aer Lingus hostesses and the army’s first female soldiers. For the past 20 years, he’s been running an art gallery in Dublin’s Royal Hibernian Way but the business has now closed although he will continue to represent artists and sell at art fairs. Adam’s is selling his surplus stock of more than 100 paintings “beautifully presented in the best of frames” and sculptures in an auction on Tuesday evening. There’s work by Irish artists including Barrie Cooke, John Behan, Tony O’Malley, Colin Middleton, Camille Souter, Evie Hone, Mildred Anne Butler and Mary Swanzy.

International artists represented include 19th century French painter Joseph Carraud whose oil Preparing for the Dance (right) embodies Jorgensen’s flair for art and fashion, and has an estimate of €2,000- €3,000.

Irish family stuck in Cyprus: ‘We hope our flights home are cancelled’
5