The Dublin-based photographer is the subject of Skin+Soul, at Dublin Film Festival 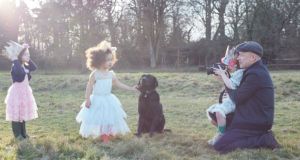 “Fashion photography is an art. Fashion pictures can be fascinating – they can reflect on the times, perceptions of beauty, attitudes towards women. At the end of the day you are advertising fashion, but that doesn’t stop you from trying to be creative, making beautiful pictures, arresting pictures.” So says acclaimed Dublin-based photographer Perry Ogden, now on the other side of the lens as the subject of a new fly-on-the-wall documentary called Skin+Soul, to be shown as part of Dublin Film Festival on Tuesday, March 3rd.

Conceived by the award-winning film-maker Ciara Nic Chormaic – who directed Snaithe, a film about Irish fashion in which Ogden appeared – this “cinematic meditation on fashion photography” follows him at work in Ireland. He describes in a considered way his approach to his subject, how he chooses models, where he shoots, what portraiture entails and how his vision has always been informed by street and youth culture.

Photography has changed radically now that Instagram has become so important. There are some great images, but also a lot of junk

It’s essentially a portrait of an artist whose commercial work pays for more personal projects. “He told me that we all have a different sense of what is beautiful in fashion and style and that we don’t need to be dictated to by glossy magazines as to what is beautiful,” says Nic Chormaic. “That chimed with me. Perry’s work is very much his own aesthetic – compassionate, sensual, raw and most of all authentic, and as a film maker it was this authenticity that drew me,” she says.

Ogden, whose images blur the boundaries between fashion and the real world, is as well known for his work with Irish Travellers as he is with feature shoots for La Repubblica or Italian Vogue. Though this Eton-educated photographer moves with ease across every level of society, he sees himself as an outsider, and has always been on the side of the socially marginalised. He attributes this attitude to his mother, Moira Keenan, woman’s editor of the Times. She died when he was 11 in 1972.

“It’s the person first before the clothes. I like to find people that to me are beautiful and when you look into their eyes, there is something behind them,” he says, surrounded by an extensive archive in his Capel Street studio. These records of work, carefully catalogued, extend back to his schooldays and the magazine he created in his final year called Lipstick, which features interviews and photographs of Andy Warhol (“loved gossip”), Diana Vreeland (“engaging and charming”), Joe Strummer from the Clash and David Bailey. “All the interests that I had at that time went into it,” he recalls with a smile.

Though he only came to Ireland for the first time in the 1980s (Marina Guinness baptised him with a visit to the Galway Blazers hunt ball in Tuam), the archive also contains a link to his Irish ancestry about which he knew little then.  As a teenager he was given a box of glass collodion photographic plates that had belonged to his grandfather, Cecil Moss, who had spent his working life in India as an engineer – Keenan of the Khyber, as he was popularly known in the family.

Moira’s grandmother, Maisie Moss, was descended from a Quaker family who came to Ireland in the 1700s, and set up a cotton mill in Kilternan. Her grandfather, Cecil, grew up in Ballybrack, and his wife was a descendant of one of Nelson’s sea captains.

“I always knew I had Irish connections, but this opened up the Irish world for me,” he says showing me his family tree, a massive sheet of names from the 1700s to the present day along with some of his grandfather’s prints of family life in India in the 1920s.

His first commercial work was making what is called “leavers” at Eton – images taken locally of graduating pupils of which a hundred copies would be printed. “I still have those negatives,” he says. In fact, the school dark room was the gestation of his career – the smell reminded him of accompanying his mother to the Times print works as a child. After she died, he was sent to boarding school with his brother William. They remain close.

During school holidays as a teenager, Ogden swept the floor and made tea for John Timbers, a leading portrait and theatre photographer in London, and another celebrated photographer Zoe Dominic, “a formidable, cigar smoker in her 50s. I learnt to process, print and retouch – it was a proper, almost Victorian, apprenticeship. My father wanted me to go to university, but Timbers told him it was too late, that I was going to be a photographer.”

Having carved out a successful career as a fashion and documentary photographer, film director and author, he has seen big changes to his profession. “It has changed radically now that Instagram has become so important, and the ease with which one can make images. There are now so many images and the attention span – seven seconds – is so short that they are only flashes, not studies in the sense that they are only seen very briefly. There are some great images, but also a lot of junk.”

He has published three books of his work and is planning another to coincide with Skin+Soul, and is getting back to making films. “People making things together – I think there is a lot of power in that. Going back to the archives and finding things has also been interesting. You make images of things that interest you, intrigue you, that you care about and that extends to wanting to preserve them because the next time they will be gone. In some ways photography is an act of preservation.”

Skin+Soul, supported by the Arts Council, will premiere at the Irish Film Institute as part of the Virgin Media Dublin Film Festival on March 3rd at 6.30pm