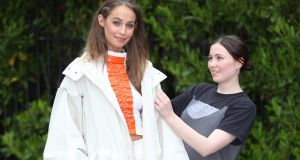 Una King’s collection called Bivouac based around using materials from tents and temporary encampments earned her this year’s €3,500 River Island bursary and a three-month internship at the company’s headquarters in London.

Her collection of functional clothing “a city survival kit” acknowledged Ireland’s ever-changing climate with protective separates in a neutral colour palette with occasional flashes of orange. Her robust shapes with delicate tulle underpieces impressed River Island’s head of design Lucy Moller, herself a recipient of the bursary 13 years ago. This is the 15th year of the prize which has offered invaluable experience in high-street design to graduates of the National College of Art and Design.

Róisín Pierce from Dublin and a textile graduate of NCAD was one of the top prizewinners at the annual Hyeres Festival of Fashion, Photography and Fashion Accessories held in the south of France. In a first for an Irish designer at the festival, she carried off the inaugural Chanel Métiers d’Art Award for her collaboration with Maison Michel, one of Chanel’s 10 métiers d’art ateliers. Chanel initiated this award to help young designers discover the possibilities of making something very detailed and Pierce worked closely with the Parisian millinery house whose heritage goes back to the 1930s. In a second coup Pierce also carried off the People’s Prize from the city of Hyeres.

“This [prize] means a lot to me,” says Rathfarnham-based Pierce. “I was very happy that the people who I respect see my potential and it will give me an amazing platform,” she says. Her innovative manipulation of broderie anglaise in her sculptural headpieces was inspired by the communion dresses made in the Magdalene Laundries. “I always wanted to do something new and to challenge myself,” she says. Her next collection will move from white cotton to soft pastels. roisinpierce.com

Anyone who can design the perfect dinner dress could follow in the footsteps of Diane Von Furstenberg who made her name and fortune from creating a wrap that fits all sizes. The latest effort to create something similar comes from Irishwoman Susannah Jackson founder of Bellarel who started her career in the restaurant business in 1989 in Dublin but ended up on the management team of Tramp nightclub in London. In 2003 she returned home and partnered with her sister to purchase the lease of Il Posto on St Stephen’s Green which they ran for more than a decade.

All that experience demanded practical and comfortable clothes which were also smart and elegant but which she found difficult to source. After selling Il Posto she founded Bellarel having sourced small European manufacturers and the right machine-washable, stretchy and figure flattering fabrics for classic, seasonless styles. It’s a small collection with each dress €129. bellarel.com

A rare opportunity to get lessons in needlework from the Royal School of Needlework in London takes place when tutors from the school come to Dublin in July. Famous for its expertise and embroidery projects that have included the Duchess of Cambridge’s wedding dress and Queen Elizabeth’s coronation robe, the school is known as a centre of excellence for the art of hand embroidery.

A wide range of techniques and designs will be taught in six day classes in Dublin from July 6th-12th at The Constant Knitter, Francis Street, and the Irish Countrywoman’s Association, 58 Merrion Road. Classes cater for all levels from beginners to advanced and cost about €180 for the day, which includes the kit. See royal-needlework.org.uk or email education@royal-needlework.org.uk