Celine Dion with no trousers, and other wow moments from Paris haute couture 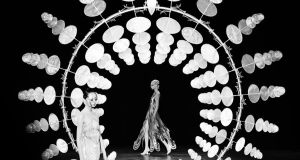 This week Paris has been hosting the biannual extravaganza of haute-couture fashion week. Synonymous with decadence and fantasy, it’s where Chanel, Dior, Valentino and the rest have showcased their autumn-winter 2019 collections.

Celine Dion used the city’s streets as her personal catwalk, emerging each day in a memorable look, including one of a coat and leotard but no trousers. Heatwave chic? No, just Celine being Celine. The Off White combination was merely the beginning; the singer also wore a tux-meets-tutu, a pink taffeta gown by Miu Miu and a Chanel spandex all-in-one that showed leggings need not be basic.

It was also all eyes on Karl Lagerfeld’s anointed successor, Virginie Viard, who made her couture debut for Chanel. The French fashion house transformed the Grand Palais into a enormous library, with more than 350,000 books as the backdrop for the signature tweed, chiffon dresses, and sequinned, embroidered and feather applique. Prim-and-proper librarian touches came via high-necked ruffles and studious-looking glasses.

Scrunchies, but not as you know them

It was a case of candy-floss couture at Armani Privé, with mouthwatering pastel confections taking to the runway. But it was more what was atop the models’ heads that got people talking: their little hats, aka forehead scrunchies, offered comic relief from the dramatic couture collection.

Wednesday’s Valentino show dominated social media in part because of its fashion-as-art gowns and in part because Lauren Hutton, one of the biggest modelling names of the 1970s, walked the runway. The 75-year-old closed the show in a riot of colour, wearing an emerald-green gown, pink opera gloves and mustard boots.

Haute couture is always a feast for the eyes, but Givenchy’s show was especially so. The label’s creative director, Clare Waight Keller, presented a theatrical collection filled with monochromatic suiting, jacquard dresses, capes and ballgowns sprouting delicate ostrich feathers. Featheriest of all was a standout gown worn by Cindy Crawford’s model daughter, Kaia Gerber, whose plumage engulfed the runway.

Merging unconventional fabrics and technology, Iris van Herpen maintained her reputation for idiosyncratic design with kinetic styles that vibrated, flounced and sparkled as her models took to the runway. Van Herpen collaborated with the sculptor Anthony Howe both on the designs and on a huge mobile that the models walked through.

Giambattista Valli kicked off couture week with a different kind of show, forgoing a runway and models in favour of mannequins. It did mean you could get up close to his bold gowns, but we’ll just have to wait for his Valli girls to wear them on the red carpet to see them in motion. Although, as Valli is the next designer to collaborate with H&M – a high-street collection is due in November – you might be able to give a taste of his style a whirl yourself.