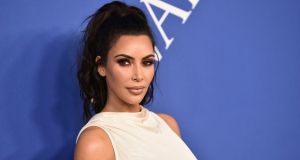 Kim Kardashian has spoke of the body foundation aiding her in tackling her decades-old secret: that she ‘has veins’, like 100 per cent of the world’s female population. File photograph: Evan Agostini/Invision/AP

As with most things Kim Kardashian does, the reality star’s latest beauty product - an already sold-out Skin Perfecting Body Foundation - has sparked an online back-and-forth about whether makeup for arms, legs and other parts of the body is feminist or not. Many say body makeup is inherently anti-feminist; others argue that it is the critique of a woman’s choice to wear body makeup that is anti-feminist.

We live in an age where it seems that women can label anything as a feminist act. To me, however, the message the product sends is quite clear: that we would probably be more comfortable in the skin we’re in if you couldn’t see it has pores. As the years-old debate about whether face makeup is empowering or oppressive rages on, men for the most part continue without it. Most of us are in agreement that, however you slice it, beauty standards are rigid and beauty regimes are still driven by external pressures rather than enjoyment. There is a difference between tolerating this and seeking its active expansion and entrenchment.

The existence of body makeup predates Kardashian: bronzers and highlighters have long been used to accentuate the body, as opposed to obscure it. In an Instagram post launching the product, Kardashian was candid about using it to conceal psoriasis on her legs - and many have pointed out that it is useful when they wish to cover their own skin conditions. But it would be naive to think that this isn’t an attempt to usher body makeup into the everyday. Kardashian also spoke of it aiding her in tackling her decades-old secret: that she “has veins”, like 100 per cent of the world’s female population. A later post showed her using it on her grandmother’s arms to conceal her veins, too.

When Asos stopped Photoshopping its models’ stretch marks, it was considered a watershed moment. An image of Beyonce’s legs with the very common “strawberry skin” small pock marks went viral; it was a rare glimpse of “imperfection” on the world’s most perfect person.

We are at an odd crossroads: we hail brands for showing women’s bodies as they are, with stretchmarks and cellulite and rashes, but hesitate to be critical when this progress is undone by products that seek to cover them up all over again. The era of expected 24-hour perfection is well and truly upon us. It is the logical culmination of years of people such as Kardashian plugging the idea that being normal isn’t normal. She did not create the system that has led us to this point, but boy, does she contribute to it. – The Guardian