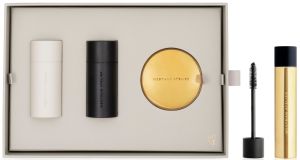 You’ve seen Gucci Westman’s work even if you’re not aware of it. The make-up artist’s impeccable style has featured on the covers of Vogue and Harper’s Bazaar, and she’s known for creating flawless skin on clients such as Gwyneth Paltrow and Jennifer Aniston. When Westman launched her own make-up brand, Westman Atelier, earlier this year, it caused major excitement. Now a select edit from the brand has come to Dublin, available at the Marvel Room at Brown Thomas.

When we chat on the phone, Westman, who grew up in the United States and Sweden and now lives in New York, says how delighted she is that her brand is coming to Ireland. “Irish people are the warmest,” she says with a laugh. Her impression of Ireland was formed years ago, she says, when she was queueing with her brother outside a Dublin theatre. They got to the front of the line only to be turned away, as the show was full. “The couple in front of us in the queue gave us their seats because we were leaving the next day.” I can hear the surprise in her voice. “I mean, who does that? That would never happen in New York.”

Westman takes beauty seriously. “What I do is thought of as a superficial line of work,” she says. “But if I can have that moment a person transforms with joy and confidence, I’ll take it.” Aiming to create a brand that bridges the gap between luxury and natural, she’s irked by lines that offer one or the other. There’s no reason, she says, why you can’t have both.

It certainly doesn’t come easy. Westman hired a green chemist as an adviser and wanted to create “therapeutic make-up”. “I have rosacea,” she says. “I thought there’s absolutely no need to put out another make-up line that doesn’t do anything for your skin… The products need to soothe and work on irritation and lock in moisture.”

For a taster of Westman Atelier, you can try Le Box (€186 at the Marvel Room at Brown Thomas). It contains the brand’s compact highlighter, Super Loaded Tinted Highlight, the already-bestselling Baby Cheeks Blush in Petal – a delicate pink shade – and the Lit Up Highlight Stick, which gives skin a gorgeous buttery gloss.

The Westman Atelier Eye Love You Mascara (€66), she says, was the most challenging. “I wanted a natural mascara that looks incredible – that’s something I could never find… It took three years, four different labs and testing 45 different wands.” The result is the mascara Westman always wanted.

The range looks beautiful, too. The sticks close with a satisfying thunk and travel beautifully. “I wanted to create objects that are beautiful and timeless but that you can use in a taxi, a train, at home.” Putting on make-up can be the only peaceful time in your day, Westman says. “I want to make the time you do have for your make-up the most special it can be.”