The Meghan Markle effect: her favourite beauty products do more with less

In beauty terms Meghan Markle is a breath of fresh air 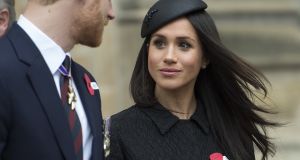 In beauty terms, Markle is a breath of fresh air; she is certainly one of the best things to happen to the beauty industry in some time. Photograph: Eddie Mulholland/Getty Images

The words ‘Meghan Markle’ will divide people at present. If you’re interested in the British royal family, then you will have views about her. If you enjoyed Suits (which I did), you will be familiar with her former life as an actress with the best hair and skin known to humankind. I will leave the pro/anti royalists to shriek at one another about how she is the worst/best thing to ever happen to the Windsor clan/Britain, and focus on her makeup instead.

In beauty terms, Markle is a breath of fresh air; she is certainly one of the best things to happen to the beauty industry in some time. It is an immense relief to see someone who is considered beautiful, which of course she is, sport a pared-back look that enhances rather than conceals or distorts. She routinely wears makeup that you can actually apply in twenty minutes, and this thrills me in an era of full drag makeup that takes two hours to apply. We could all do worse than to buy into the ‘Meghan effect’ a little.

Thankfully, Markle led a life among the rest of us (sort of) for most of her existence and was vocal about the products she uses and likes, so if you seek to emulate her fresh, impeccable aesthetic, you can. Unsurprisingly, her favourite products veer toward the luxury end for the most part. We must, however, grant her impeccable taste – Markle clearly knows the good stuff when she finds it.

There are Beauty Blender duplicates in every pharmacy, and many of them are nice, but I haven’t yet found any with the same soft bounce combined with structural integrity of a beauty blender. That said, I’m not paying almost eighteen quid for a sponge (even one I really like). Markle is known to use the Beauty Blender – it can create the sheer wash of perfectly blended foundation she likes, or can be used to pound on the base while you go full Kardashian.

In the October 2017 cover of Vanity Fair featuring Markle, famed makeup artist Mary Greenwell, who worked frequently with Princess Diana, used this base on Markle. It is the most luxurious of luxury foundations. This is also what Markle’s makeup artist used on the set of ‘Suits’, so you know it’s a winner.

Markle began using this while filming Suits, but liked it so much that it made its way into her everyday makeup stash. It gives a radiant, naturally flushed glow to cheeks that works for every skin tone.

Refreshingly disinterested in covering her signature freckles, Markle uses this primer to inject her skin with glow before applying a sheer wash of foundation.

Markle’s hair is the stuff of the average woman’s hirsute fantasy. It has a soft gloss and an airy bounce that there is no doubt is a consequence of professional styling and attentive care. However, if you seek her bouncy, defined tresses, Markle recommended Oribe Dry Texturising Spray in an interview with Birchbox, and the product is the secret weapon of many a stylist.

At last, something that won’t create too large a dent in the wallet. Markle has publicly expressed her devotion to the previous iteration of this moisturiser, to which Nivea recently added vitamin C. I share her preference for the older version of the lotion, since vitamin C is too volatile and short-lived to be really functional in a body cream like this. Either version, however, is quickly absorbed and gives skin a soft, radiant feel and look.

As well as a fondness for these and other products, Meghan Markle is known to have a fondness for £300 visits to expert facialist Nichola Joss. I feel confident that we all would (Joss is a wizard) if our money was not destined for less illustrious spending and Joss’ waiting list did not extend so far beyond the horizon line that it is invisible to the human eye.