The lipstick that has raised $500m for charity 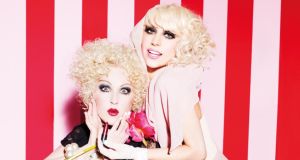 Mac is the brand that drew me to make-up. The weirdest, most alternative girl at my school (whom I admired tremendously) strutted into class one day with electric green eyeshadow on. I had never seen anything like the daring, the pigment. “What . . . is that?” I asked her. “Mac,” she said softly, as though gifting me with sacred knowledge.

I visited Limerick’s Mac counter in Brown Thomas that day. For Limerick in the early 2000s, it was seriously different – there were boys and girls in full drag make-up, purple lipstick and intense colour long before it was a trend or part of the mainstream.

Mac was a brand for people who didn’t fit in, or felt like they didn’t; a brand that unequivocally championed individual expression for everyone. The imagery featured men, older faces, and models of colour long before other brands opened big campaigns to them.

I visited that make-up counter every Saturday for two years. So often in fact, that when I recently met the current Mac national artist Anna Donegan (who had worked on the Limerick counter back then) in my work as a beauty journalist, she remembered me skulking about at weekends, fawning over the products.

Viva Glam was a Mac counter mainstay that set it apart from other big brands. The first Viva Glam lipstick launched in 1994 at the height of the HIV/Aids epidemic, with the drag queen RuPaul as its face. The campaign imagery is now the stuff of beauty industry legend.

The campaign, which celebrates its 25th anniversary this year, has used provocative and sometimes unusual faces – among them Elton John, Ricky Martin, KD Lang, Dita Von Teese, Lady Gaga, Nicki Minaj and many others – to drive sales of the various Viva Glam lipsticks and lip products.

Decades before cause marketing became a form of reputational currency for beauty brands, Mac was quietly donating 100 per cent of the retail price – less VAT – of Viva Glam products to HIV/Aids causes globally. In the past quarter-century, more than $500 million (€556 million) has been raised, which the company claims helped 19 million people last year alone.

In an industry which has now thoroughly recognised the selling power of virtue, many brands are vocal about social causes without an iota of legitimate conviction, marketing products on the back of token charitable donations to whatever cause is most fashionable. But Mac has done things the right way.

“We need more companies using their corporate or brand microphone to do good in the world,” says Nancy Mahon, Mac Cosmetic’s senior vice-president. She believes it’s time for the company to make a bit more noise about the good it is doing. “This year we will have raised half a billion dollars,” she says. “It’s been a very humble, understated campaign, because it started for all the right reasons.”

Mac chose HIV/Aids as its cause one year after homosexuality was decriminalised in Ireland, and supported controversial initiatives like clean needles, even funding one of Canada’s first safe injection sites. This certainly wasn’t a cause celebre at the time, but things have changed a lot in the past 25 years.

“This is a really interesting time. I think in some ways that it’s the golden age of purpose,” Mahon says, emphasising how consumers now have the power to direct the causes of industry. “What we have seen a lot is what we call ‘buycotting’ – particularly women, voting with their wallets and using their purchases as an expression of their values.”

It seems I’m not the only one with a history of spending my money at Mac counters; Mac Cosmetics has sold 203,482 Viva Glam lipsticks in Ireland since 2007, resulting in a donation value of €3.861 million.

“Brown Thomas has been an incredible partner,” says Mahon. “When I first started working with Mac, we went to Brown Thomas Dublin with Pamela Anderson, which was quite the launch. We see enormous amounts of heart, spirit and commitment among our Irish customers.”

Mahon is Irish American – her grandparents came from Sligo, Westmeath and Ennis. She credits her pragmatism and sense of justice to their humility and work ethic which is, she says, “such a feature of Irish people, and Irish emigrants”.

The HIV epidemic has changed a lot since 1994. Aids-related deaths have fallen by 50 per cent, more than 21.7 million people now have access to medication, and new HIV infections have reduced by 47 per cent globally. Now, Mac wants to broaden the scope of what it can do with the funds raised through Viva Glam.

“There’s still a lot of good work to be done,” Mahon says. “We’re still seeing very high rates of infection among young women and girls, particularly in Sub-Saharan Africa, but also in many developed cities, among girls and women of colour, refugee women and girls, and also very high rates in gay, bisexual and transgender men and women . . . We’ve always funded Planned Parenthood and other groups along the way who’ve provided services to women and girls. What we’re basically doing now is saying that is an important explicit part of our work, as well as basic LGBT rights and access to care.”

As part of a reoriented campaign to mark the 25th anniversary, 10 “heritage grantees” that have received support from Viva Glam since the beginning will be given $25,000 each, while three large grants totalling $1.3 million will be awarded to Planned Parenthood, GLAAD (Gay and Lesbian Alliance Against Defamation), and Girls, Inc to support their work in the areas of sexual health, LGBTQ+ rights and female empowerment.

To celebrate the anniversary, Mac has re-released the Viva Glam lipstick (€20) in its original, powerful red shade, packaged in a sparkling red bullet. It is available now at Brown Thomas and Arnotts.