Second highest market for fake tan in the world? Take a bow, Ireland 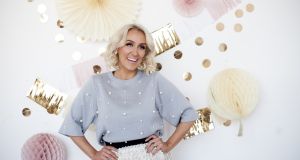 You glow, girl: Melissa Carter has got her products on to the Instagram feeds of Kylie and Khloe Kardashian, creating global awareness of her tanning brand, Cocoa Brown

Marissa Carter is a well-known Irish entrepreneur for good reason. Her tanning brand, Cocoa Brown, is soon to celebrate its fifth year in business and is by all accounts a towering success in Irish business. Carter is known for her innovative approach to product development and marketing; she says she was the first to use DMI (dimethyl isosorbide) in her tanning products, which ensures penetration of the product so that it doesn’t sit atop the skin and oxidise, as well as minimising that classic burnt biscuit smell. In a first for at-home tanning products, the ingredient also ensured a one-hour development time, which was unheard of when Cocoa Brown hit the market.

When I ask Carter whether she had any sense of the potential for her idea to take so successfully, and the brand to grow as much and as quickly as it has, she chuckles. “No,” she says. “I had no idea then that it would go this way, but when we got the brand into Superdrug in the UK, it reinforced for me that we were on to something with the world’s first one-hour tan.” Ireland is the second most voracious market globally (after Sweden but before the UK) for tanning products. Pushing outside the home market was a major challenge for the young brand, which, at the time, had been in existence for just seven months.

You get a distinct sense, when talking with Carter, that you are dealing with an unusually determined person, but she puts her belief in the potential of her idea when she first started amid financial uncertainty down to persistence. Running her own salon during the recession, she says, “toughened [her] up”. “My husband and I walked around housing estates in the rain hand-delivering leaflets advertising treatments in the salon because it was the only advertising we could afford.” When things became quiet in the salon, Carter explains, “I would start thinking about how I might end up having to let someone go, or wouldn’t be able to pay my rent that month.” In comparison to those experiences, the possibility that Cocoa Brown wouldn’t get off the ground didn’t frighten her. She isn’t unsettled by the idea of failure. “We’re put off by thinking that other people find it easier, or automatically know how to do things. They don’t. It’s supposed to be hard.”

Despite failing her exams at the end of the first year of her marketing and French degree in DIT, Carter is widely known for smart marketing and a keen ability to detect industry trends. Cocoa Brown is stocked in more than 800 Superdrug stores in the UK, as well as Penneys and Tesco in Ireland, among others. She has managed to get her products on to the Instagram feeds of Kylie and Khloe Kardashian, creating global awareness of Cocoa Brown.

The next big trend, Carter says, is product customisation and personalisation. People like the idea of a product being tailored uniquely to them. The next challenge she has set herself is to figure out how to make her brand meet that desire from customers. She cites major brands such as Coca-Cola, MAC Cosmetics and Nutella who have dipped their toe in the trend. This sort of ambitious thinking goes some way to explain the unprecedented and exponential growth of Cocoa Brown since its inception five years ago. She doesn’t see a single reason why her brand cannot be one of the global giants. “The average rate of growth of false tanning worldwide is 15 per cent year on year. For Cocoa Brown, it’s 25 per cent. I always say that if everything feels under control, you’re not going fast enough.’

·      Exfoliate thoroughly every day with a scrub in the shower, for two or three days before applying tan.

·      Make sure you follow that up each time by applying body lotion all over the body.

·      Apply your tan with a mitt rather than hands or other application tools. It will give you the smoothest, streak-free finish.

·      Use an intense tan if you have very dry skin because tan darkens and goes patchy on dry areas. Opt for a gradual tanning moisturiser for a finish you can slowly build until you’re happy with it.

·      Put too much tan on your face, hands, or feet. The skin is thinner in these areas and tan tends to look darker, so go very, very sparingly for a natural looking finish.