Beauty: Arrival of cult brand to Arnotts a coup for the beauty hall 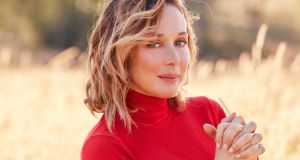 Those who build commercially successful beauty brands from the ground up tend to fit a certain mould, but Tata Harper is in so many ways an outlier.

Her luxury skincare brand, which happens to include some of the highest quality natural ingredients on the market, is a resounding commercial success with a loyal customer base of converts – once you try the products, readjusting to run-of-the-mill skincare can be challenging.

The only Tata Harper counter in the world outside the US, where Colombian-born Harper is based, just opened in Arnotts beauty hall in Dublin, featuring a wood aesthetic (Harper oversaw the design herself) and interactive selfie mirrors. The counter is an enormous coup for the store, whose beauty hall is quietly growing to kick all competitors a rung down the ladder. I have loved Tata Harper for years, saving and travelling to acquire it – finally, it’s in Ireland.

When I sit down with Harper in Arnotts and ask her how she started, she tells me that she did everything wrong – at least according to the industry people who she hired to advise her.

She refused to do the usual thing of finding a formulator to provide a product base, whacking in a few chosen ingredients, and then selling the result after spending most of the budget on marketing. Instead, she built her own products from scratch with incredible attention not just to the ingredients and how ethically they are sourced (which is vigorously tested), but what they are preserved in, how they are stored, and how fresh they are.

Harper was advised that she would make more money by ignoring these elements, and making and packaging the product cheaply. Her way was too expensive and customers would not pay more for a natural, ethically-made and sourced luxury skincare product. An engineer by profession, Harper has managed through a methodical problem-solving approach, a dual focus on ethics and hard science. Her desire, she says, was to make the skincare she had always wished existed, to create a range of products so efficacious and beautiful to use that those who can afford to will happily pay for them.

The counter is a thrilling addition to Ireland’s beauty scene, and evidence that we are taking our skincare more seriously than ever. For those new to the brand, among my favourites is the Tata Harper Hydrating Floral Essence (€70) facial mist. For an incomparable facial oil, the Tata Harper Beautifying Facial Oil (€80) must be tried to be believed. Tata Harper Clarifying Cleanser (€70) is a perfect morning cleanser for the congestion and breakout prone, while the brand’s newest product release Tata Harper Resurfacing Serum (€88) also helps in this department while keeping cell turnover high and skin soft and glowing. Finally, for an eye cream that will convert those who think eye creams don’t do anything, there is Tata Harper Restorative Eye Crème (€100).