Male grooming is going mainstream, and that includes makeup that is subtle and masculine 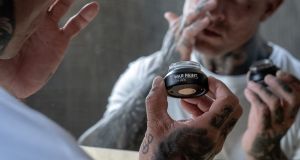 Before lockdown, when there were still things like meeting a friend without significant forward planning, and job interviews, I met a friend for a spontaneous cup of coffee. He had an interview later that afternoon and was feeling anxious. “It doesn’t help”, he winced, “that I woke up with this stupid spot right in the middle of my forehead”. I had been politely pretending not to notice, but we’ve all had that spot; the one people stare at and talk to.

My friend was embarrassed by the fact that the spot bothered him, but of course it did. He’s only human – it’s a visual distraction that he hadn’t anticipated needing to worry about during a stressful interview. “I have some concealer on me”, I said. “I can put a little on there and no one will be able to see it. It’ll be one less thing for you to worry about.” He demurred, so I let it go. Within a few minutes, he brought the conversation back to concealer, and I was dabbing a touch onto the blemish. The spot disappeared and the concealer was invisible. “Wow”, my friend said. “What’s that stuff called? Should I buy some maybe? Would that be weird?”

It was, in my opinion, the greatest concealer ever made, NARS Radiant Creamy Concealer (€30 at Arnotts). It comes in 30 shades, is simply and gender-neutrally packaged, and will cover any blemish you can throw it at.

Of course, male grooming is going mainstream, and that includes makeup. According to Research and Markets, the men’s grooming market is expected to grow to $78.6 billion (€66.7bn) by 2023. Traditionally, this has mostly been women buying grooming products for men, but that’s changing.

According to War Paint, a men’s makeup brand that has just launched in Arnotts and Brown Thomas, only 29 per cent of their products purchased were bought by women. The brand’s bestselling product is their concealer (€22 at Brown Thomas and Arnotts), but they also offer a tinted moisturiser (€26) to even skin tone and an anti-shine powder (€22) for oilier skin, and other products, including a bronzer (€23) for men interested in colour cosmetics.

You don’t need expertise to apply these sorts of products well. Makeup artist Leonard Daly advises that, like anyone applying makeup, men should “keep it light. Apply any foundation with fingers to give the most natural finish, tapping it in rather than rubbing it, this gives a far better finish. And always set it with a powder. Men have oilier skin naturally and this tends to play havoc with makeup, carry your powder with you for top ups during the day”.

Chanel’s Boy de Chanel range, currently consisting of three products, but due to expand this October, originally launched in South Korea, where wearing makeup is simply standard, particularly for younger men. Currently, you can try the Boy de Chanel foundation (€65 at Brown Thomas), which is available in nine shades, the eyebrow pencil (€40) and the lip balm (€38). The products are subtle, masculine, and don’t look like makeup.

A lasagne with a difference: swap aubergine layers for pasta sheets
8