Zoom fatigue, plus the arrival of Rihanna’s Fenty range, could create the perfect storm 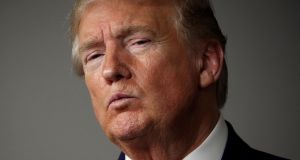 Josh Blaylock, a business developer, decided that his face needed a little lift after his Zoom calls increased exponentially. His virtual meetings had ballooned from two to six to eight hours a day during lockdown. “‘Zoom fatigue’ is real and I realised I needed a little help to stay fresh faced and ‘Zoom ready’ for my meetings,” he says. So he decided that he needed to use a concealer under his eyes. He is not alone. Zoom has radically changed men’s perceptions of our faces, what is acceptable as “camera ready” and what real-life filter we want to have.

“I think that people are more self-conscious of their faces now,” says TJ Tallie, professor of African History at the University of San Diego and a fashion blogger. “The monotony of Zoom screen interactions begs for a bit of breaking up of the daily view.” Tallie is on Zoom calls for 30 hours a week with students and staff and, like Blaylock, uses under-eye concealer. “It made me use it more selectively for natural things,” he says.

Internet searches for “male makeup looks” increased around 80 per cent in April compared to 2019, while there were increases for searches such as “covering redness”, “hiding acne” and “hiding bags under eyes”, according to data from the market analytics firm Moz.

“During lockdown we certainly saw an uplift in [the men’s makeup brand] Warpaint,” says Joe Coggrave, a beauty buyer at John Lewis. “In particular, the brand’s foundation and anti-shine powder proved popular with those wanting to look ‘camera-ready’ for Zoom meetings.”

A poll by Morning Consul, meanwhile, found that a third of male under 45s in the US said they would consider wearing makeup.

This Zoom effect has had a knock-on economic one, too. “Men’s grooming has seen incredible growth during this stay-at-home period,” says Maly Bernstein, VP of beauty and personal care at CVS. The “Boots of the US” has added a men’s makeup line, Stryx, to 2000 of its stores.

that’s right baby...@fentyskin is for my fellas too! No matter who you are, you deserve to have great skin! 👌🏿 More product details soon come 👉🏿 Hit the link in my bio to sign up for early access to shop!

At the weekend, Rihanna said her Fenty Skin range, which launched on Friday, was not just for women. “That’s right baby …” she wrote under a picture of herself with A$AP Rocky, “@Fentyskin is for my fellas too! No matter who you are, you deserve to have great skin!” It came after a short ad for the products that featured Rocky and Lil Nas X alongside models Paloma Elsesser and Halima Aden. It ends with the tagline: “The new culture of skincare.”

This “new culture” is one created by K-pop bands like BTS (who wear full faces of makeup onstage) and male beauty influencers such as Jeffree Star and James Charles who have made men’s makeup “Instagram OK”.

But men’s relationship to makeup has been knotty. As an external expression of masculinity it has expressed itself in different ways.

The ancient Egyptians wore eyeliner, the Scottish Picts wore blue stripes on their faces in times of war, and the act of getting ready for the day, the so called “toilette” of 18th-century England, saw men put fine lead on their faces to look pale and have a smooth complexion.

Much later, Little Richard wore pancake makeup and drew on his pencil moustache; then, under the guidance of Pierre LaRoche, David Bowie transformed from Ziggy Stardust to Aladdin Sane with a lightning stripe down his face. Roxy Music’s Brian Eno wore multicoloured eyeshadow in the form of Mary Quant’s crayons and Prince added blusher and eyeliner to his 80s look. The comedians Russell Brand and Noel Fielding took eyeliner into the metrosexual era of the late 90s and early 00s.

But whereas then makeup was used for semaphoring sexual ambiguity, now it is about appearing more presentable in the digital era. We now live in a very visual, “Instagram-ready”, society,” says Blaylock. “Men more than ever have embraced fashion and skincare. With the rise of online dating, selfies and being camera-ready, men and their girlfriends/wives understand it’s not about them putting on a full face of makeup; it’s about fixing up under-eye bags and covering up those problem areas like acne and razor burn.”

Politicians have been using it for years. In 2017, it was revealed that Emmanuel Macron spent €26,000 on makeup over a three-month period, while a Washington Post article about undocumented workers suggested that Donald Trump used a cheap and cheerful shade of concealer on this face (Nutmeg WPF06 Waterproof foundation). In a paragraph that detailed his specific habits and requirements, the article said: “The same rule applied to the Bronx Colors-brand face makeup from Switzerland that Trump slathered on – two full containers, one half-full – even if it meant the housekeepers had to regularly bring new shirts from the pro-shop because of the rust-coloured stains on the collars.” (The official word on the shade of his skin was “good genes”, according to the New York Times.)

“He’s never admitted that he wears makeup every day,” says Cheryl Wischhover, who wrote about his beauty secrets for Vox, “but he has a long history of TV appearances and on The Apprentice, so he’s probably very comfortable with the concept,” she says. “If he does wear makeup IRL, I think that TV application techniques and products [which are applied with a heavier hand than so-called ‘everyday’ makeup] has skewered his perception of how to use it.” I ask Wischhover why she thinks Trump chose such a bright-orange shade. She replies: “This is truly the question everyone wants answers to, and I sadly don’t have one.”

Trump’s denial of his beauty routine is in keeping with a tough, macho image. It is in contrast to the approach of Generation Z, whose view of makeup is one of expression rather than gender definition. Taille – who has been using makeup since 2014 since he came out – says he uses it to question masculine stereotypes. “As a male professor, there’s something slightly transgressive about wearing it,” he says. “I can challenge stereotypes subtly [and]expectations for masculinity.”

The launch of Rihanna’s Fenty Skin is already a success (pre-launch, the products were on resale sites at massively inflated prices), but could it also be the moment men’s makeup goes truly mainstream? Jill Manoff, editor in chief of the beauty site Glossy, thinks so. “With Fenty Skin, Rihanna is catering to a [demographis]that has been comparatively ignored by the industry, true to form,” she says. “[She’s] kept it simple with three products that don’t overwhelm the everyday guy,” agrees Blaylock. “On top of that, the products are incredibly affordable.” - Guardian