How good is the Dyson Airwrap Styler?

Review: It costs €500 but it is a remarkable and exciting beauty tool 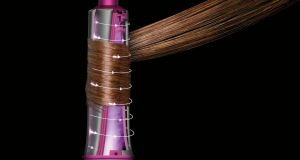 The Dyson Airwrap styler is the most exciting electronic beauty tool released since the company launched the Supersonic hair dryer. Yet, at between just under €450 and €500, it is a major investment. The Airwrap uses the coanda effect, which (apparently) occurs when a high-speed jet of air flows across a surface and, due to differences in pressure, the air flow attaches itself to the surface. Essentially, the jet of air curves itself around the curved styling attachments, taking the hair with it – it is remarkable.

The Airwrap is light but large – the average user might prefer smaller, more easily manipulated device and I found it less ideally proportioned than Dyson’s Supersonic hair dryer. As a curling tool, it is ingenious. If you can blow dry your own hair well, then the brush attachments are not better than a great hair dryer and a round brush. However, if you find blow drying your hair impossible, then this is a revelation – the volumising round brush does give that bouncy, professional-looking finish. It is also superior to the likes of the Babyliss big hair (a rotating hot brush) because it is easier to use and doesn’t rotate, so catching, tearing or tangling doesn’t happen. There is a stiffer brush attachment for coarse hair which comes in the Smooth and Control Set (€449.99), and a softer one for finer hair which comes in the Volume and Shape set (€449.99)– only a professional stylist would need both.

The curling or waving attachments are where the device shines. Two barrel options are available, 30mm and 40mm, and both come with the complete set (€499.99). The 30mm are good for traditional curling, or for thicker hair. For that loose wave which has been around fashion for years now and seems to be going nowhere, the 40mm barrel is better. The lower power setting was not getting my hair to comply – it created a fuzzier and less defined curl. Turn the power up, however, and the wrapping effect is enhanced, the finish smoother and the hold better; you can change the heat setting too. There is no drag or pulling on the hair at all, but you will probably need to style smaller sections of hair than you would with a traditional heated styling tool.

The Airwrap uses air in combination with heat, so there is only so much hair the device can hold at a given time – your reward for this is the ability to style the hair from wet, and the improved condition you will see over time for ditching aggressively heated metal or ceramic styling tools, which work, but at a much higher cost to hair health. The Airwrap is not particularly quiet, but less noisy than the average hair dryer. While incredibly expensive, it makes complex styles achievable.

This is not a good investment for someone looking for a straightening or smoothing tool alone – it simply costs too much. For those who want skill-free, professional-looking and varied styling options with minimal heat damage, however, there is genuinely nothing like the Airwrap styler.