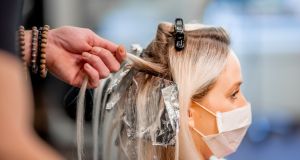 Many hair salons across the country will introduce “Covid charges” or a small percentage increase on prices when they reopen, according to the Hairdressing Council of Ireland.

The council, which represents around 400 salons and 2,000 hairdressers across Ireland, said that most of these charges would cost “somewhere between €5 and €10” and would be used to cover the cost of PPE.

Seán Taaffe is president of the Hairdressing Council of Ireland and runs six salons across Co Kerry. He said he would be introducing a €5 surcharge to cover the cost of face masks, disposable gowns and the cleaning time between each client.

He added that other salons were opting to instead introduce blanket price hikes but stressed that these were small. “For the most part, nobody I’ve talked to seems to be looking at increasing prices above five per cent, if they are at all,” he explained.

There has been concern that hairdressers may charge extra to address longer root regrowth or to correct home dye jobs. Hair salon chain Peter Mark was criticised earlier this week when they announced that these services would carry an additional cost of between €45 and €60.

Wildflower, a hair salon in Ranelagh, says it is increasing the price of their colour services by “a small percentage”.

“People haven’t gotten their hair done in months so it does make sense that we would have to increase the prices because we’re using more product and time,” explained Shannon Kenny.

She added that the price alterations would also go towards covering the costs of things like Perspex screens and hand sanitiser. Additionally, they will make up for the fact they are now taking fewer clients per day. She said that clients are supportive of the price increase.

“We’re very lucky with our clients that they’re so understanding,” she said.

Carol Joyce, owner of Yourell’s in Galway, said that they would increase service prices by 5 per cent to help the business cope with additional running costs and the reduced number of appointments.

“This increase is being communicated to each client as they make their booking,” she said. “Other cost increases will be looked at on an individual basis depending on the service required. For example colour corrections or changes, which add to our costs and appointment times.”

Wayne Lloyd, who owns Wayne Lloyd Hair in Cork, says that clients may have to pay more for colour correction services, but insists that was the case before lockdown anyway.

“Say you coloured your hair at home and it’s gone black and it’s meant to be a nice brunette; that’s going to take longer in the salon and there is normally an additional cost to that,” he said. “We’re not adding on any additional costs.”

Aside from a small charge for PPE, Lloyd says he does not plan on upping his prices.

“In January I put my prices up slightly because of the VAT increase and the minimum wage increase,” he said. “That is realistic. You have to do that. Otherwise you wouldn’t be able to keep your doors open.”

“Going back after Covid, I am trying to be as mindful as possible to clients because I know they’ve had no money, too. We’ve made some changes in the salon. Will we be passing it onto the clients straight away? Me, personally, not straight away. I think it’s going to be a difficult time for everyone.”

Tamar Chambers of Robert Chambers Hairdressing in Dublin says that the cost incurred to prepare for reopening has been “high and counting” but added that they will not be increasing prices.

However, the salon will be introducing a €10 charge for PPE. This, she said, has become the norm in reopened salons across Canada, the US and Germany.

“I would urge all salons to charge a nominal fee to help carry the financial burden to reopen over the next month or so until we see how the Covid-19 situation develops,” she said. “Nobody knows.”

Elsewhere, some hairdressers say they will not be booking children in for appointments until the first couple of weeks after lockdown.

“That’s simply because we need to prioritise our elderly and vulnerable clients, clients we cancelled and clients on the waiting list,” explained Wayne Lloyd.

“The schools aren’t open yet. It’s not a punitive measure but we have to prioritise our elderly and vulnerable clients first. It’s a sensible measure for salons to adopt. Kids aren’t going back to school just yet. We have a bit of time.”

Readers on overseas travel: ‘I am responsible enough to go and manage the risk of Covid’
6