George Clooney, the 59-year-old actor and human-rights activist, has admitted to successfully cutting his own hair at home using a device called a Flowbee, when he appeared on the Jimmy Kimmel Live Show on ABC. 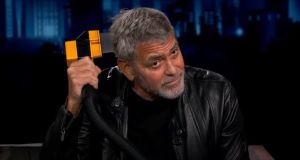 With hair salons largely closed until last week, male grooming has been in freefall since the start of the spring lockdown. DIY haircuts have not been successful for all. Yet one Hollywood star has proved that, even in a global pandemic, bad hair is not the great equaliser we hoped it would be.

George Clooney, the 59-year-old actor and human-rights activist, has admitted to successfully cutting his own hair at home using a device called a Flowbee. “My hair’s really like straw, so it’s easy,” he told CBS Sunday Morning. “You can’t really make too many mistakes.”

According to Clooney, twice voted People magazine’s sexiest man alive, the $139.95, or €120, contraption is so reliable he has been using it for more than 20 years, not simply during 2020. “My haircuts take literally two minutes,” he said. Clooney, who added that its speed and efficiency had given him time to stain the garage doors, mop the floors and do much of the family’s laundry during lockdown in their Los Angeles home, also demonstrated his Flowbee method on Jimmy Kimmel Live.

The Flowbee was a defining product of the 1980s infomercial boom in the United States. It was designed in 1988 by Rick Hunts, a San Diego carpenter who was moved to invent the product after using his industrial vacuum cleaner to suck sawdust out of his hair. Hunts initially created and sold the gadget from his garage. But it was live demonstrations at a local county fair that edged him towards success; global fame soon beckoned, in the form of late-night TV demonstrations. By 2010 more than two million Americans had bought one.

The Flowbee is in effect a pair of adjustable height clippers with a suction tube; its longevity is partly down to theatrics – according to various online tutorials, an “up and down bouncing motion is best” – as well as positioning within popular culture. The Flowbee appeared in the cult 1990s sitcoms Party of Five and Home Improvement, and was one of the many products parodied in the film Wayne’s World, where it was misnamed the “Suck Cut”. It helps too that the product is almost too ludicrous to forget.

Google searches for Flowbee took off following Clooney’s admission, and the Flowbee website itself crashed. But while his endorsement will no doubt lend invaluable celebrity cachet to the brand’s image, largely unchanged since the 1980s, the Clooney effect is not in fact responsible for the product’s pandemic-era success.

As early as mid-March, the Flowbee had sold out on Walmart’s website and on amazon.com. (It is not marketed in Ireland or the UK.) Hunts, who demonstrates the model himself on the website, was not available for comment. – Guardian