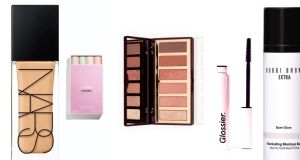 Who has time for a full face of intense, sultry makeup when you have enough to be doing trying to get a freshly washed batch of underpants to dry in a damp kitchen?

What this time of year lacks, in every sense of the word, is freshness. Not to complain (I am in fact complaining), but January is all sweaty bus windows, turnips and norovirus, and these are just three of the traumas this month obliges us to navigate.

We wake up in heated rooms with skin that feels as though it has been pickled during the night. All in all, skin feels gunked-up, makeup looks drab and coagulated, and the deep tones of winter eyes and lips start to feel a bit stale. But! But. You don’t have to wait until spring to freshen things up.

With temperature fluctuations and early evenings, what I’m craving are lighter, dewier textures that won’t sweat off or be sucked hungrily into thirsty skin. At the toughest time of year, most of us want to look like the most flattering, healthiest version of ourselves.

Who has time for a full face of intense, sultry makeup when you have enough to be doing trying to get a freshly washed batch of underpants to dry in a damp kitchen?

Well-prepared skin is the key to good makeup, and a good cheat is Bobbi Brown Extra Illuminating Moisture Balm (€56 at counters nationwide). As well as moisturising, it will impart your skin with a delicious false enthusiasm, providing a radiant glow that suggests you don’t eat sugar and spend eight weeks a year at an ascetic Austrian resort, detoxing your gut and chakras.

Nars Tinted Glow Booster (€39 at Arnotts) is what Nars call a “complexion-enhancer”. It comes in four skin-toned shades composed of pearlescent yellow and beige pigments, and promises to look natural and non-chalky on all skin tones. You can wear it alone, under or mixed into foundation, and while it doesn’t offer coverage per se, it has a smoothing and perfecting finish.

Fresh eyes doesn’t have to mean bare eyes. Charlotte Tilbury Charlotte Darling Easy Eye palette (€54 at counters nationwide) takes sunset shades – in flattering pinky hues rather than harder-to-wear oranges – and makes them wearable. Blue, green and brown eyes all contrast wonderfully with pinks, and the finishes vary from matte to sparkles, suiting every inclination. Whether you want a maximal or a minimal eye, the easiest and fastest route to looking a bit less over it all is a decent daytime mascara.

It’s hard to beat Glossier Lash Slick (€16 at glossier.com) for a chic, effective black-as-priests’-socks mascara that doesn’t move or crumble. It gives length, sensible, grown-up volume, and lasts all day.

If you don’t feel like changing up your skin or makeup routine, seek out a fresh fragrance instead. Chanel Chance Perfume Pencils (€75 for four at Brown Thomas) are a playful, travel-friendly way to wear the most polished “fresh” fragrance you can buy.

Just colour the fragrance on with these pastel crayons and top up as much as you like. Since they are not a spray, they have the deeply pleasing characteristic of being impossible to overapply.