Dyson’s new €500 hair straightener: is it worth the price?

A lot of clever features set the Corrale apart, but the biggest one is that it’s cordless 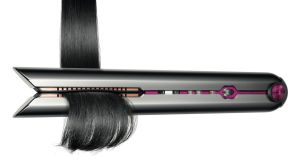 Dyson Corrale Straightener: It is gutsy of Dyson to take a stab at improving a classic device that most hair-conscious women already own

Keeping a secret is difficult at the best of times. In the beauty industry, where news of the next big thing engenders frenzied excitement, and everybody knows everyone else’s business, it’s even harder.

We weren’t told what item was being launched by the brand. Something new in hair, we guessed. The brand was known mostly for its vacuum cleaners until the release of its Supersonic Hair Dryer in 2016, of which I am a diehard fan. The Air Wrap Styler followed in 2018, creating curls and waves to a bouncy blow-dry look.

When Dyson told a room full of editors that they were going to launch a hair straightener, I wasn’t surprised, but can confess to feeling a bit underwhelmed. GHD has that market utterly cornered; booting them from the top spot would be very challenging indeed, and not just in Ireland, where GHD straighteners gave many of us our first-ever good hair day, taking us suddenly from “windswept farmhand” to frizz-free gloss in minutes.

There are a couple of cordless straightener options out there, but they are nowhere near as powerful

It is gutsy of Dyson to take a stab at improving a classic device that most hair-conscious women already own. At €499.99, the Corrale is also more than double to price of the most advanced straightening device offered by the leading competitor.

As usual with Dyson, intense research and a lot of clever features set the Corrale apart. The major unique feature is the flexing plates, which distribute the hair evenly, and distribute heat (there are three optional heat settings) evenly through it. This means you don’t need as high a heat to style your hair, making the new straightener a significantly less damaging option than traditional devices. It also controls the hair within the plates, so friction and damage is reduced.

The most appealing aspect of the Corrale is the fact that it is cordless. There are a couple of cordless straightener options out there, but they are nowhere near as powerful. The Corrale has the power and consistent heat of a corded straightener, recharging in 70 minutes and operating for up to 30 minutes cord-free. Putting it back in its charging cradle now and then while styling (when you section or brush your hair) will increase the time. The lithium-ion battery makes the straightener larger than standard, but as usual with Dyson, they have somehow weighted it so that it feels light and nimble in your hand.

So is it a good buy? If you can afford it, heat style regularly and are concerned about damage, then yes. If you can’t pick up the knack of waving or curling with a straightener, then probably not. With a tool like this, you need to get your money’s worth.