Alexandria Ocasio-Cortez: the divided reaction to her six-step skincare routine 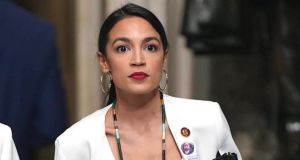 Alexandria Ocasio-Cortez: damned if you double cleanse and lazy if you don’t. Photograph: Joshua Roberts/Reuters

Last week, towards the end of her first month in office, Alexandria Ocasio-Cortez, Democratic representative for the Bronx and Queens in New York, posted a five-page Instagram story on her skin routine. It split the internet.

It wasn’t the use of retinol that sent critics into a spin. Ocasio-Cortez’ double cleanse/toner/moisturise/sunscreen/vitamin C/do-not-sleep-in-your-makeup, six-step regimen is not exactly anomalous for a 29-year-old woman with an income. Nor is it a surprise that a woman working in the public eye washes. After all, we live in a world in which communication is visual and where a woman in lipstick in a political space will still turn heads. (AOC should know: in June, during the New York primary campaign, she tweeted the shade of her Stila lipstick and there were similar repercussions.)

What seemed to pique her detractors’ rage was that in spite of a record number of women serving in the US Congress, and in spite of AOC being a woman who took a man’s seat, the politician had dared to admit a base level of vanity. And she wore sunscreen. In contrast, last week, the New York Times finally rumbled Donald Trump for allegedly wearing fake tan and “a little powder which the president applies himself before television appearances” and no one batted an eyelid.

She doesn’t think it’s too trivial to talk about, which is honest – and promotes the idea that people can be multifaceted

But what the congresswoman’s post shows is how in the past two years the concept of skincare has changed beyond all recognition. Where once we were told to cleanse, tone and moisturise (and later discouraged from over-exfoliating), the kind of multi-step Korean-influenced beauty routine that Ocasio-Cortez subscribes to has taken on near-religious power. In fact, AOC’s “face layering” routine looks positively spartan in comparison to the laborious regime of about 10 different steps adopted by some women in South Korea and Japan. The industry exploded globally a couple of years ago, but it has already moved from novelty to backlash, while in October women in South Korea destroyed their makeup as part of a movement called “escape the corset”. AOC’s endorsement simply shows it has gone mainstream, appearing as a regular topic in the New Yorker and Atlantic, well outside of the beauty blog bubble.

Along the way it has also normalised some pretty weird vernacular, from snail slime and donkey masks to “mules” (people who are paid to bring things back from abroad) and “dupes” (products that mimic expensive products for half the price). And then there’s the money. Newish companies that specialise in multi-step products such as The Ordinary and Drunk Elephant have successfully rebranded “anti-ageing” products as “millennial” ones, and in turn, sent revenues hurtling towards the billions. According to Kotra, the South Korean government agency for trade promotion, $4,536,943 (about €4 million) worth of K-beauty products were legally exported to the US in 2018, up almost a million on the previous year. Who knows how much comes through more nefarious channels. Multi-step beauty is not simply an arm of the industry, it is its own economy.

For many of us, the idea of AOC double cleansing is both fascinating and reassuring. Fascinating because in dark political times, there are few better balms than reading about the routine of a politician, and reassuring because it proves that AOC is one of us. Lisa Niven-Phillips, the beauty editor of Vogue.co.uk, saw her endorsement as pivotal to her success as a politician: “The thing with AOC is that she doesn’t think it’s too trivial to talk about, which is honest – and promotes the idea that people can be multifaceted. I love the transparency; that’s how she got millennials on board, isn’t it?”

Niven-Phillips came across the regime in Seoul six years ago and has since upped her skincare count to six steps. Like AOC, she double cleanses (a thick one to take off makeup, less thick to actually wash) uses a vitamin C serum, a hydrating serum, a little moisturiser and, twice a week, an exfoliant. If going to a party, she uses a sheet mask: “They’re good for immediacy, rather than any long-term benefits,” she adds. And, for anyone asking, the whole thing takes five minutes, and means she wears less makeup as a result. “That was always the idea – to improve your skin first so you didn’t need to then cover it in makeup.”

I’m tired, it is cold and it is fun to experiment with goo

Anita Bhagwandas, the former beauty editor of Stylist magazine, agrees. She has seven or eight steps – including the double cleanse – and more in the winter. “I always thought the multi-step regime was a myth,” she says. “Now it seems perfectly normal. I don’t know why there is so much fuss and mystery surrounding it.” The whole thing takes less than 10 minutes, and she, too, wears less makeup as a result. “The natural skin look on Instagram has definitely replaced the contouring one.”

My own routine is based largely around curiosity and eBay samples of products I’ve read about. In the past few weeks I have tried double cleansing (micellar water to remove dirt, something foamy to wash) and slathering Sunday Riley’s teal-coloured Luna oil on my face. I have a bunch of vitamin C serums (good for brightening, I’m told) and until I dropped it down the sinkhole, a tiny 5ml pot of Sunday Riley glycolic acid. To me, it is less a capitulation to the patriarchy and more a sort of fun tax – I’m tired, it is cold and it is fun to experiment with goo. There is a very real reason that, according to market researcher Kantar, sales of bizarre looking single-use sheet masks are up 48 per cent year on year.

In truth, it is not solely about creams and oils. Skincare has always been about putting money on your face, but while a lot of it is probably snake oil and a financial drain, it is no coincidence “face layering” has risen in popularity with self-care, another catch-all phrase which has been buzzing around over the past few years. Its meaning has become amorphous – we now think of it as me-time, or candles in the bath – but it was originally a medical concept applied to mental and emotional health. At a certain point, it even became a political act, reclaiming health and wellness from the white patriarchy who kept it to themselves. In 1988 the African-American writer Audre Lorde described it as “not self-indulgence” but “self-preservation, and that is an act of political warfare”. That AOC is a woman, a millennial and also a socialist, has arguably redirected self-care back in that direction.

So maybe it is no coincidence that self-care mushroomed in the wake of the US election and the EU referendum. According to Slate magazine, in 2016 Americans Googled the word self-care twice as often as they ever had before. Skincare and self-care are not the same – but there is an overlap. Niven-Phillips, Bhagwandas and I can all vouch for that. Layering six creams is clearly about cocooning your skin, but also yourself. The beauty writer Rio Viera-Newton, a follower of the multi-step regime whose Google doc of routine products led to her becoming a contributor to New York magazine, agrees. “I’m always taken aback by the assumption that skincare is something that’s in service to a person other than yourself.”

So whether a 10-step regime actually works is besides the point. “I don’t think skincare needs to be excessively complicated with a large number of steps, nor do I think it needs to be expensive,” says Dr Anjali Mahto, a consultant dermatologist. Sure, there is some science to it “and we can all benefit from the basics of cleansing and moisturising, but many of the ingredients in high-street or drug-store skincare products are exactly the same as in luxury brands”. Her own routine includes the famous double cleanse – “I remove the day and all of my makeup with a micellar water, followed by an AHA/BHA foaming cleanser” – but she agrees it is as much about “the whole experience – choosing the product, its smell, texture, packaging and feeling of wellbeing it can create (even if it’s for a short period of time)”.

In many ways, skincare in 2019 is not solely about vanity and the reversal of time. It is also about female anxiety and the pressure to care but pretend you don’t. While perfect skin does not exist, the pursuit of it does and for some women, talking about that can be empowering. As Naomi Wolf outlines in the Beauty Myth, “women can tend to resent each other if they look too ‘good’ and dismiss one another if they look too ‘bad’”. As AOC can attest, you’re damned if you double cleanse and lazy if you don’t. – Guardian