Today the five are 18-year-olds on the cusp of adulthood, individuals with their own ideas and ambitions 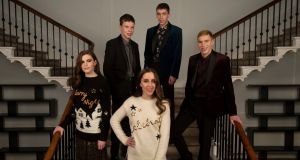 Kevin and Veronica Cassidy will never forget Christmas 2001, when their newborn babies were all finally home – all five of them. The Cassidy quintuplets, the only ones in Ireland, made headlines and history in August 2001, when they were delivered at 25 weeks’ gestation by Caesarean section at the Rotunda hospital weighing between 1lb 6oz and 1lb 11oz.

Quintuplets are extremely rare – the average estimate is one in every 60 million births.

After weeks in neonatal intensive care and various operations, the babies came home to Bridgetown in Wexford separately – Conor was the first, Cian was 10 days later, five days after that Rory in November, and on December 8th the two girls Dearbhail and Amy. A list of chosen names had been given by the Cassidys to the hospital, and were assigned by the intensive care staff to the newborns.

“After [they came home] it was all hands on deck,” recalls Veronica of the formidable parental challenges they faced. “The first Christmas stands out hugely because it was so chaotic, but obviously there was the joy of having them all home.

“Our sitting room became a nursery, and I remember looking at them and thinking ‘oh, my God, these are all ours.’ I was skin and bone and exhausted, and it was hard going. But we had a lot of help. Our house was never private after that, and that was hard though very much appreciated”.

Today, the quintuplets are healthy 18-year-olds on the cusp of adulthood, real individuals with their own ideas and ambitions and preoccupied with their forthcoming Leaving Certs in June.

Their dad Kevin is the caretaker of Bridgetown Vocational College where they are students, while Veronica, a stylish former hairdresser, runs the household.

At weekends Amy works in Meylers Millhouse (beside Ireland’s oldest windmill) in Tacumshane, Co Wexford; Conor and Dearbhail work in Wexford, Conor in Button & Spoon Tea Rooms, Dearbhail in McGees bar and guesthouse. Horses and sport play a big part in their lives.

They all love Christmas though they don’t give each other presents, just to their parents.

Conor remembers when they all got bicycles for Christmas, Amy recalls a kitchen set “and we got a good bit of play out of that”, while Dearbhail’s doll Milly is still a memory, and Rory a pool table “that took up the whole room”.

They share friends, and what Conor, the eldest, most loves about being a quin “is that you always have someone to talk to”.

They also hang around at school together “because we are so used to each other’s company”, says Cian, though Amy, close to Conor, grins when she remembers that they had to be separated at junior Infants “because we were always messing”. It is clear that they all get on – “for the most part”, Cian chips in with a smile.

Most are clear about post-school plans.

Cian, who spends a lot of time on his uncle’s stud farm, adores flat racing, and is thinking about an online course in journalism having already reported on a point-to-point.

Conor wants to be a teacher and is considering studying in Limerick.

Rory’s ambition is sports journalism. A disciplined athlete, he runs four or five times a week, and in September did 10km in 42 minutes. He has had work experience in transition year on South East Radio in Wexford and Newstalk. He admits leaving the others and moving away from home for third level would be a challenge.

Amy is interested in television and radio production, while Dearbhail’s heart lies in veterinary nursing after work experience earlier this year with the RSPCA.

The girls are Kim Kardashian fans and their music tastes include Ariane Grande and the rapper Post Malone.

This Christmas Eve, as always, they will go to their grandfather’s house, a family get together that they all clearly love, for tea and presents. “Every Christmas is special and unique,” says Rory.

For Kevin and Veronica, Christmas Day at home with them will mark another year, another milestone in the remarkable survival and flourishing of their miracle children.