All hail Orla Kiely – the Irish Queen of Prints 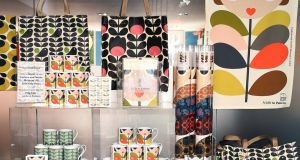 “It feels good,” says Orla Kiely, standing in one of the galleries of London’s Fashion and Textile Museum on the eve of a major retrospective devoted to her work. “When we first agreed to this, we went together [with the curators] to our warehouse; that was the beginning of delving into what we kept over the years.”

And what she kept fills the entire museum, showing how the prolific Irish designer has created vivid, playful and instantly recognisable patterns; it’s cleverly curated, too, designed to show how those patterns have been applied in fashion and homeware. Such has been the impact of her work that the expression “that’s very Orla Kiely” is now in design vocabulary.

An L-shaped hallway leading into the museum’s largest gallery has been created and lined with countless patterns pasted floor-to-ceiling like a vast sample book, while small Perspex cases hold random patterned objects: wellington boots with a green apple pattern, a suitcase with her taxi design. The lighting is kept low to let the sunny colours shine.

“We wanted to show how varied her work is, and to introduce Orla’s aesthetic,” says textile historian Mary Schoeser of this pattern-filled entrance, “and hopefully that people will set aside any preconceived notions . . . to show that there is so much more than Stem.”

It all gets back to Stem, though, that pattern that Kiely created more than 20 years ago and that she has returned to time again, reimagining it in different colours and in different scales, embellishing it with flowers, or discreetly adding it to her bags in embossed shapes or stitching.

Schoeser describes Stem as deceptively simple, unusual for a pattern for its scalability; she says Stem will survive “in the pantheon of great design” as a classic.

In the main gallery, vast dresses in Kiely’s patterned fabric – perfect down to the last frill and hemline, each with more than 60m of fabric – hang from the ceiling, with a series of tiny dolls in the same fabric framed on the walls.

Upstairs, an army of 30 mannequins wear Kiely’s ready-to-wear collections – not chronologically, as might be the norm in a fashion retrospective, but each dressed in items from collections as much as 10 years apart: a dress from this year matched with a 15-year-old bag and a five-year-old cardigan to show that Kiely’s is a consistent vision and to reflect how she sees her clothes being worn. There’s a strong sense of a coherent vocabulary of style at work.

Visitors can see her film collaborations with artists including Mercedes Helwein and Gia Coppola; the extensive “look books” from each ready-to-wear season will fascinate fashion students.

And the bags: there’s a wall of them, 100 in all, tracking the scope and range of Kiely’s output. Most came from the company’s impeccable archives, some from other sources including eBay, tracked down to fill in the gaps in the story.

Standing in front of the wall of bags, Schoeser tells a great story about how Kiely’s business (which she runs with her husband Dermott Rowan) began; about how when, as a graduate first of NCAD in Dublin and then the Royal College of Art in London, she was showing her hats to little impact at a trade show.

Her father came along, looked at the lack of sales and said: “Look around, Orla, no one is wearing a hat but every woman is carrying a handbag.”

It’s a personal show, too – her brand has always kept close links with home. After more than two decades in London, she says she still talks of “going home” when she makes her regular trips to Ireland.

The brand’s fashion shoots, shot in Ireland with local crew and models, line the walls and there are family photos, clippings from Irish newspapers and ephemera from her student days.

It’s a sign of the loyalty of her fans that the Kilkenny Shop has been stocking her work for 20 years – with repeat customers coming back every season for the latest bag or to see what the brand is doing in its ever-growing homeware line.

This isn’t a straightforward retrospective, says Denis Nothdruft, who curates Orla Kiely: A Life in Pattern and is head of exhibitions at the museum. “It’s experiental. Orla was keen to have a sense of play,” he says, pointing to the giant dresses and the tall wooden totems in the galleries, painted like mix-and-match dolls which by September, when the exhibition ends, will have been spun to show all their permutations many times.

Meanwhile Kiely, arguably Ireland’s most successful designer, at the helm of a global brand that bears her name, is quietly pleased.

“It’s been a lovely opportunity to look back and to see it all together,” she says, “We’re always looking forward at the new season, but looking at it all here, it all seems to sit together as one thing.”