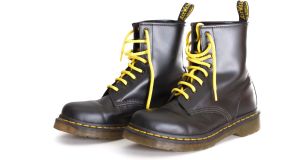 Tony Benn wore them. So did Agyness Deyn. Suggs loved them, also Kathleen Hanna and Joe Strummer. And Jordan Catalano. Hailey Baldwin, Rihanna and Bella Hadid still do. Once you start looking, Dr Martens are everywhere. Sixty years after launching the eight-hole 1460 boot – on, as the name suggests, April 1st 1960 – it is an undisputed classic, one of those rare-as-hen’s-teeth designs that is as likely to be spotted in a museum as it is (until recently, of course) on the streets outside. It is up there with Levi’s 501s, the Fred Perry polo shirt, the Converse All Star and the Harrington jacket.

And, like these other items, the 1460 is enjoying a fashion moment beyond its classic status. Perhaps because the past decade has been so turbulent – even before we had a global pandemic to contend with – fashion has returned to the dependable. The Hadids, Baldwin and Kaia Gerber are all endorsing Dr Martens. In other words, as Vogue declared in October, they have become “model off-duty staple”.

While the vegan range and patterned designs have been credited with a 70 per cent rise in profit for the brand in 2019, the 1460 remains the bestseller and it is this history that is likely to have attracted rumours in March of a more than €300 million sale to a US private equity firm.

Dr Martens, and the 1460, began with a collaboration. If most modern alliances are between two brands (JW Anderson x Uniqlo, Adidas and Raf Simons), this one was a bit less hypebeast-friendly. A small shoe factory in Northamptonshire partnered with two doctors in Munich. Dr Klaus Märtens had developed an air-cushioned chunky sole in 1947, after a foot operation following a skiing accident in 1945, and had begun making it with his friend Dr Herbert Funk to sell these comfortable shoes to older women.

In Britain, the shoemaking Griggs family saw an ad for Martens’ soles in 1959. After acquiring the licence, Bill Griggs designed the 1460, the eight-hole boot with the now familiar yellow stitching and chunky Märtens sole, although when marketing the design for postwar Britain, the umlaut in Martens’ name was removed at launch.

Initially, the 1460s took the lead from Märtens’ designs, which were worn by those who prioritised comfort and durability. Marketed as a work boot and sold for about £2 (roughly £38 in today’s money), postmen, factory workers and policemen wore them, and they became part of the uniform for London Underground workers.

However, as with army jackets, jeans, even trench coats, the Dr Martens boot secured its place as a staple in our wardrobes after becoming a uniform for a series of subcultures. “It’s almost easier to list which subcultures haven’t adopted Dr Martens over the past six decades,” says Andrew Groves, a professor of fashion design at the University of Westminster and the curator of Invisible Men, last year’s exhibition about men’s working wardrobes. “The list of those style tribes that took the DM to their hearts includes punks, skinheads, northern soulers, scooterists, as well as (later on) teenagers into grunge, two-tone, and Britpop.”

As a symbol of working-class culture, it was the original skinheads – before the term equated to the far right – who first picked up on the 1460s. When the Who’s Pete Townshend wore them on stage in 1967, he put them on the radar of the band’s growing fanbase in the proto-skinhead scene. In his classic book Subculture: The Meaning of Style, Dick Hebdige sees the take-up of Dr Martens as the rejection of the explicitly aesthetics-based mod culture of the early 60s. Instead, this look was “aggressively proletarian, puritanical and chauvinist”.

Groves also points out the inherent rebellion of wearing something practical for its aesthetic value – even if that value is about fetishising working-class culture rather than just wanting to look sharp. “At their heart, all youth subcultures love nothing better than annoying their parents,” he says. “What better way to do that than adopting the boots your dad wears for his respectable job and subverting them into the latest youth craze?”

During the 70s and early 80s, the 1460s became part of a uniform worn with skinny bleached jeans, braces and, quite often, a bit of a snarl. Images of skinheads – either in Gavin Watson’s classic photography book Skins, or Shane Meadows’ This Is England trilogy – often feature DMs, and they continued to be associated with the subculture, even as, as Meadows documented, it became darker, as the far right infiltrated it.

Although this association is still there, it’s now a whisper – thanks to Groves’ litany of other, less controversial, subcultures that also took up the DM. By the time i-D magazine’s A Decade of i-Deas was published at the end of the 80s, the style magazine had declared them “the fashion accessory of the past five years”.

I remember blisters covering the back of my heels for weeks when I got my first pair in the 90s. Groves says he wore them “when I was a mod, a skinhead and a casual – I’ve worn them polished up with Sta-Prest trousers and scuffed-up with jeans. I’ve probably got at least three or four pairs at the moment.”

The breaking-in that the 1460 requires has now been a rite of passage for young people for more than 50 years. The current generation – who would have seen them worn by King’s Road punks, kids in archive rave footage, Damon Albarn in the 90s, as part of queer culture from the 80s onwards, and emo in the 00s – have a whole archive of #inspo to explore. There’s a democracy and an “everyboot” quality to them that appeals – the Hadids might have a very different life from a 90s schoolgirl, but they, too, would have had to go through the blisters stage. Sophie Rhind, the senior footwear buyer at Asos, argues the democracy of the style is its strength.

“The diversity of celebrities and influencers who are wearing DMs further hammers home the point that the brand can be worn by everyone and can be styled any which way possible,” she says. On the site, it’s the Jadon – a version of the 1460 with an uber-chunky sole – that is the most popular, with 20,000 pairs sold last year. Dr Martens is also producing a “remastered” series of 1460 collaborations this year – the Japanese brand A Bathing Ape and Raf Simons have featured so far.

While tweaks to the boot are okay (camo print from Bape, ring decoration from Simons, the Jadon chunky sole), the recognisable design has to remain. In times of crisis such as we are experiencing now, perhaps putting on a boot that is tough, familiar, classic and (eventually) comfortable is what we need. While we won’t be venturing far, they are the choice for your daily walk: Bella Hadid was photographed in Los Angeles this week on the way back from Target, wearing her DMs. “The Dr Marten is such an archetypal object that they can be worn in both an understated manner or used to underplay a full-on fashion look,” says Groves. “It’s hard to imagine anything else being worn by your postie and Gigi Hadid, and both looking equally good in it.” – Guardian