Cycling is a good thing, and boy do cyclists know it 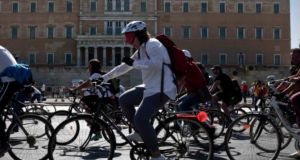 “Of course cycling should be encouraged and protected and made central to all plans for sustainable transport.” Photograph: Reuters

Here is my contribution to National Bike Week, which starts on Saturday: cyclists are the spawn of the devil. This statement may contain the tiniest tincture of unfair generalisation. But given the widespread tendency to mistake a cycling helmet for a halo, it needs to be said that not all of Hell’s angels ride Harleys. Cyclists like to see themselves as the great oppressed minority of the streets. The truth that dare not speak its name is that the worst oppression is inflicted on the defenceless pedestrian and that two-wheeled yobs do most of the oppressing.

Cyclists have issues with self-esteem: they have far too much of it. It is hard to blame them. Cycling is indeed a many-splendored thing. It is good for the environment. It shows personal responsibility in the fight against ill-health and obesity. It affords the rest of us images of heroic perseverance: an old lady pedalling up a hill against a rain-sodden West of Ireland winter wind is the visual epitome of human doggedness in the face of the innate cruelty of an absurd universe. The cyclist is Christ on a bike, martyr and saviour all in one.

The problem with all this goodness is that it creates a sense of rectitude entirely divorced from actual behaviour. Being on a bike is itself irrefutable proof of your decency, care and civic worth. You don’t have to do anything else - like show a modicum of concern for those with whom you share public space.

What’s happened with cycling is a classic case of the “and the office boy kicked the dog” syndrome. On the road, trucks bully cars and cars bully cyclists. So what happens? The cyclists move onto the footpath (hint: the clue is in the name) and bully the pedestrians. Those on foot are the lowest of the low. Their space can be invaded with impunity; their safety is of no account whatsoever. W.B. Yeats wrote satirically of the revolution after which “a beggar on horseback lashes a beggar on foot”. In the great cycling revolution, the new master of the footpath is in a smaller saddle, but for the poor beggar on foot the lash goes on.

Most weekday mornings, I do a circuit on foot (the activity might be called running if that word did not suggest notions of velocity and alacrity) around the area of north Dublin where I live. A long stretch of it has a very good cycle lane. Maybe once a month, I might see a single person on a bike in the cycle lane. This is not because there are no cyclists - there are dozens of them at any given time. It’s because the cyclists simply decided at some point that they would all use the narrow footpath. They wheel along it like a panzer division while the red surface of the cycle lane glows in stark, staring nakedness.

This might be tolerable if the invaders showed even a glimmer of awareness that they are on someone else’s territory and should behave with respect and caution. But, glowing as they are with that impregnable aura of goodness, most of them act as if it is the pedestrians who are the trespassers. They hurtle round corners without looking. They freewheel down hills. They ride three abreast - I’ve seen elderly people and parents pushing prams forced out into the traffic. And when they crash into people, as they do, their usual reaction is to curse at the stupid pedestrian who was too slow or too thick to get out of their way.

The independent TD Finian McGrath, whom I often see on my morning circuit, got dog’s abuse recently when he accused many cyclists of “arrogance and bad behaviour”. But it was interesting that he got a lot of support from people who actually have to watch the streets from day to day: school wardens and lollipop ladies who reported that while motorists generally obey their signs, significant numbers of cyclists simply ignore them and plough on regardless of the safety of children. Anyone who keeps an eye on busy suburban streets can see this kind of thing happening all the time. That presumably includes the Garda. But I’ve never once seen a cyclist warned, let alone arrested, for the reckless endangerment of pedestrians.

And yes of course there are many highly responsible cyclists. And yes of course cycling should be encouraged and protected and made central to all plans for sustainable transport. But walking on the footpath is sustainable transport too and it’s time pedestrians stood up for their rights. Why are cyclists immune from the law? Why does the Road Safety Authority’s guide for cyclists contain just a single sentence on this issue - “Never cycle on a footpath” - that refuses to engage at all with the flagrant daily reality that they do? Why do the bike lobby groups use phrases like “duty of care to the more vulnerable” to mean only the duty of motorists to cyclists?

And cyclists need to get over themselves. Yes, you’re wonderful - thanks. Now, is there any chance you might share a bit of that beneficence with the rest of us?

Voices from the class of 2020: ‘We are flying under the radar’
Real news has value SUBSCRIBE