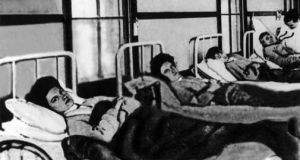 Mary Mallon (First from left) in a hospital bed. She was forcibly quarantined as a carrier of typhoid fever in 1907 for three years and then again from 1915 until her death in 1938. Photograph: Wikimedia Commons

At the dawn of the 20th century New York City, like numerous other locations around the world, was battling a disease that afflicted thousands of people annually. One in 10 who contracted it died as a result. Yet the local medical authorities only had an incomplete understanding of how the disease was transmitted. They were at a loss to explain how those who didn’t appear to have contracted it via contact with existing sufferers or through consumption of contaminated foods or liquids could be falling ill. It would take an enterprising private epidemiological investigator to solve the mystery and to identify the root cause of the spread - an asymptomatic typhoid carrier from Ireland named Mary Mallon.

Born in 1869 Mallon had arrived in the United States as a young adolescent after leaving her native Tyrone. She lived with her aunt and began working as a domestic servant for a number of the more prominent New York families before becoming a cook, a position which paid much better than her previous roles. She proved to be particularly talented and found positions easily. In 1906 she was working for the Warren family at their home in Long Island when six of the 11 people resident there contracted typhoid fever. Initially, the soft clams the family had eaten were blamed for the outbreak and an epidemiological investigator named George Soper was hired to confirm the cause.

He soon determined it was not the clams, as not all of those who became infected had eaten them, and that instead the cause must lie elsewhere. He felt that there must be an unwitting human carrier of the disease and soon settled on Mallon as the likely suspect. He reviewed her employment history and discovered that during the previous six years 22 further cases of typhoid fever had been recorded at homes she had previously worked in, one of which had proved fatal. No healthy carrier for the disease had ever been previously identified and Soper became almost obsessively fixated with Mary. He arrived at the home of her then employer and demanded urine, blood and faecal samples from her to confirm his hypotheses. She was shocked and refused his demands, reputedly chasing him away with a carving fork. After several subsequent requests to comply were met with hostility the New York Police Department (NYPD) were called, and Mallon was forcibly detained and tested. She proved positive and was confirmed as an active carrier of typhoid bacilli and was moved to a small cottage in the grounds of the Riverside Isolation Hospital on North Brother Island.

Mallon would spend the next two years in isolation on the island before she came to the attention of the media following a legal challenge regarding the health authorities right to detain her there. They dubbed her “Typhoid Mary”– a label she deeply resented. She did not accept that she could be an active carrier of the disease while exhibiting no symptoms and refused to have her gallbladder removed – a procedure which would have allowed her to resume her career and leave the island.

She would eventually be released in 1910 on the condition she no longer worked as a cook or prepared food, and that she followed a prescribed hygiene routine. However, within months of returning to the city she grew resentful of the laundry work she was now forced to do and decided to return to her old profession. In 1912 a team of investigators were sent to the Sloane Maternity hospital to determine the cause of 25 typhoid cases that had broken out there, two of which had resulted in fatalities. They found that the cook was none other than Mary, working under the pseudonym “Mrs Brown”.

Mallon was immediately detained and sent back to Riverside, where she would spend the last 23 years of her life. While thousands of healthy carriers were later identified, many of whom infected far more people that Mallon, none earned the same level of notoriety or were so frequently vilified by the national media. Neither were they forcibly incarcerated. Her case sparked a long running debate in America on whether individual civil liberties could be violated when it came to matters of public health, and what rights and responsibilities infectious individuals should be entitled to.

As we ourselves try to come to terms with these very questions in response to the ongoing Covid-19 pandemic, the story of this emigrant Irish woman has never been more timely.