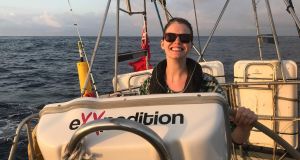 Claire McCluskey on board the S/V Travel Edge in the south Pacific. Photograph: eXXpedition

We stood blinking in the bright sunlight that beamed down on the Polynesian island of Rapa Nui, known around the world as Easter Island. It was early March in the South Pacific, the tropical breeze was pleasantly warm. We had just sailed here from the Galápagos Islands, an Ecuadorian archipelago – across 2,009 nautical miles of expansive blue ocean. As we stepped on to the jetty with wobbly legs – our first time on land in two weeks – a small crowd of local women had gathered to welcome us ashore, helpful hands reaching out to grab ropes, bags, arms.

The question came as a surprise, not so much for the asking of it but more for how it sounded. Two of us from the crew were indeed Irish. It was just... the woman asking us this question had the strongest Tipperary accent we had ever heard, which isn’t the first thing you expect to hear as you come ashore.

Gabriela Hucke Rafter, who had recognised our accents, was half-Irish, half-Rapa Nui. She had grown up in Ireland and moved from one island to the other in 2014. As for the two of us from the boat, Helen Morris was from Wexford originally, now a human rights lawyer with the UN High Commissioner for Refugees in South Africa. I am an artist based in Dublin, originally from Monaghan. Until our voyage, we hadn’t met before, either.

Plastic had brought us together.

Helen and I were crew members on board the eXXpedition Round the World voyage, a research mission investigating the growing problem of microplastics in the world’s oceans. A UK-based non-profit, eXXpedition has gained global recognition for their all-female sailing adventures, researching and raising awareness on the plastic issue. The Round the World voyage is their most ambitious project to date; intended to take just over two years (now extended due to Covid-19) the mission will see a total of 300 women taking part across 30 voyage legs that will span the globe.

There were 14 of us on board for Leg Seven – three professional sailors, a mission leader, and the rest of us as guest crew. All women, all of us from different backgrounds, professions and nationalities. The idea behind the eXXpedition project is to bring together people from all perspectives, to forge a truly interdisciplinary approach to tackle the problem.

The sailing boat S/V Travel Edge was our entire world as we sailed through the open ocean. It was 73ft long with an open-plan interior – close quarters, for that many people. Basic tasks were made that little bit more interesting as the boat sailed up-wind, into the choppy waves, consistently leaning at an angle of 15 degrees. For. Two. Whole. Weeks.

And yet harmony prevailed, each sailor looking out for another, sharing sunscreen, stories and seasickness remedies. Daily life passed with the regularity of routine, guided by an energetic schedule of watch duties and science-based activities. Underlined by the mission motto “to make the Unseen Seen”, the eXXpedition science program will be the first completely global study of marine microplastic distribution, including in its survey four of the five oceanic gyres and the Arctic.

Designed by Dr Winnie Courtene-Jones at the University of Plymouth, the study is an investigation into the distribution of particles throughout the marine environment and how they differ in polymer type, quantity and location. If we know more about what types of plastics are in the ocean, we stand a better chance to prevent them getting in.

As we swept the ocean surface, gathering our samples day after day, it was really shocking to discover so many minute particles in the seemingly clear water. Using infrared technology we could identify that about 50 per cent of the particles we found were High Density Polyethylene – HDPE – a common material used in food and cosmetics packaging.

It was unsettling to find such human impact in such a remote place, hundreds of miles from land. Nearing Rapa Nui, we were finding up to five times the amount of plastic in our trawls as when we first set out.

More than half of the plastic in the world was produced in the last 13 years alone. It is estimated that eight million metric tonnes of plastics enter our ocean each year, on top of the approximate 150 million metric tonnes that are already there. Some places are confronted with this evidence more than others.

This is certainly the case with Rapa Nui, where the coasts are inundated with pollution. Our findings dismayed but did not surprise Gabriela. She tells us that locals describe the ocean as sick, vomiting up plastic on the shores, barely kept at bay by their weekly beach cleans.

We compare this island to our own. In Ireland, we too have a problem with plastic on our beaches but it is not quite as obvious. Not yet so aggressively confrontational. And so we do not yet feel the urgency. We can choose to look away, if we want to. On Rapa Nui, they can’t look away. There is no away.

Despite the circumstances, it was a fitting and fortuitous end to our epic adventure, the meeting of Helen, Gabriela and me. But is not inconceivable to imagine that we have met before. Or, to put it another way, something that was once mine, or Helen’s, or yours may have washed up on the beaches of Rapa Nui, only to be gathered up by Gabriela and her clean-up crew.

Like its maker, plastic can travel great distances, unencumbered by borders, powered by the ocean currents. And all oceans eventually connect. All oceans are one.