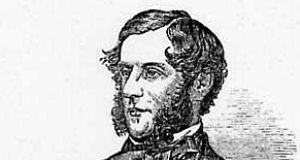 Irish banks and those at their helm, have never been strangers to controversy. The recent tracker mortgage scandal, Anglo Irish loans debacle and even the now all but forgotten Ansbacher tax evasion affair are all evidence of what can happen when stringent financial regulations aren’t maintained or those charged with leading our financial institutions abuse their positions. What might come a surprise is just how far back such practices date.

John Sadleir, a native of Shronell in Co Tipperary, would become one of the most notable banker of his era for all the wrong reasons. He was born in 1813 into a relatively wealthy farming family. He went  to school at Clongowes Wood College in Co Kildare and after he was apprenticed as a solicitor to his cousin before being called to the bar at the age of 24. He would enjoy a relatively successful career in Dublin and Tipperary over the next eight years before founding the Tipperary Joint Stock Bank with his brother James in 1839. James would become the bank’s managing director. The bank prospered and would eventually boast nine branches in counties Tipperary, Carlow and Kildare. What their depositors and investors didn’t know, however, was that James had provided his brother with almost unrestricted access to all of the funds held by the institution.

John left Ireland in 1846 and settled in London where he became convinced his fortune could be made through speculative investments in the burgeoning railway companies then appearing across Europe. Initially, he acted as a legal adviser and parliamentary agent for prospective investors before becoming one himself.

He soon held shares in companies in Great Britain, France, Italy and even Sweden, and leveraged his Irish banking experience in order to be elected chairman of the much larger London and County Joint Stock Bank, which boasted over 20,000 customers and 60 separate branches. Concurrently, he also spent the equivalent of €20 million on land acquisitions and owned more than 12,140 hectares ( 30,000 acres) at one point.

His ample funds and parliamentary connections enabled him to launch his own political career and he successful contested the 1847 UK general election. He became MP for the Carlow constituency for the Whig party though he would defect to the newly established Independent Irish Party in 1852. After five years in Westminster, Sadleir became so adept at manipulating the wheels of power that he managed to get his brother James elected as the MP for Tipperary, where he shared the constituency with his cousin Francis Scully. Two other cousins, Robert Keating and Vincent Scully, were also returned as members of parliament for Waterford and Cork respectively. All five were Roman Catholics and collectively they banded together to lobby for the repeal Ecclesiastical Titles Act of 1851, a piece of anti-Catholic legislation barring anyone outside of the Church of England from holding an episcopal title in right of a location within the United Kingdom and any property such individuals sought to hold in right of such titles would be forfeited to the crown. Their opponents dubbed them “the Pope’s brass band” but their opposition won them support within Ireland.

The 48 seats won by the Independent Irish Party held the balance of power following the 1852 general election and they appeared well positioned to enforce their demands for reformed tenancy rights, but John Sadleir broke ranks and took the role of junior Lord of the Treasury within the government of Lord Aberdeen. This defection went against an earlier electoral promise not to take up office caused outrage in Ireland and he lost the mandatory by-election in Carlow that followed his appointment but took a seat in Sligo. In Sligo he was dubbed “the vomit of Carlow” and “the Jackal of John Bull” for the rest of his political career, which ended in 1854 when it was revealed he had orchestrated the arrest and imprisonment of a customer of the Tipperary Joint Stock Bank for refusing to vote for him.

His parliamentary failings were soon overshadowed when he was investigated for corruption and it was revealed he had squandered all of the holdings of the Tipperary Joint Stock Bank on failed investments and that it was now insolvent. He was also found to have sold forged land deeds and shares in several railways companies, and abused his position as a legal custodian of several properties held in receivership by misappropriating the rents to himself. Rather than face the victims of his crimes and the lengthy prison sentence that awaited him he died by suicide at Hampstead Heath in 1856. A note was found next to his body that read:

“I cannot live - I have ruined too many. I could not live and see their agony. I have committed diabolical crimes unknown to any human being.”

His brother and extended family were left to repay his enormous debts, though James immediately fled England eventually ending up in Switzerland where he remained in hiding until he was killed during an attempted robbery in 1881. So ended one of the most high profile financial scandals to 19th century Ireland.

An Irishwoman in Milan: ‘Everything that usually seems important suddenly isn’t’
2