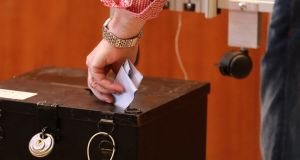 Some 52 per cent of 1,131 people asked by polling company Ireland Thinks last month said that all Irish citizens abroad should be entitled to vote, with 39 per cent opposed to the idea.

A narrow majority of people believe that all Irish citizens with valid passports who are living abroad should be allowed to vote in future presidential elections, a new poll shows.

Some 52 per cent of 1,131 people asked by polling company Ireland Thinks last month said that all Irish citizens abroad should be entitled to vote, with 39 per cent opposed to the idea.

The survey found that 56 per cent of respondents said Irish citizens living in Northern Ireland and the rest of the United Kingdom should be allowed to vote. Some 43 per cent were opposed.

The Government has made a commitment to hold a referendum on whether to give Irish citizens living outside the State the right to vote in presidential elections.

If passed, the referendum would allow these citizens living abroad to vote from the next presidential ballot in 2025.

Those in favour of extending the vote to the Irish abroad has fallen slightly, from 55 per cent, since a similar poll was conducted by the same polling company a year ago.

The poll was commissioned by VotingRights.ie, a campaign group set up to give Irish emigrants overseas the right to vote elections at home, and the UCD Clinton Institute ahead of a virtual conference on Irish citizenship, emigrants and voting post-Brexit taking place on Monday.

Speakers at the conference include Minister for Foreign Affairs Simon Coveney and Minister for the Diaspora Colm Brophy.

A slim majority, 51 per cent, of people were opposed giving all Irish citizens, in Northern Ireland and overseas, the right to vote in Seanad elections, while 41 per cent were in favour.

The idea of designating seats in the Seanad for Irish emigrants living overseas was rejected by 58 per cent of the people polled, while 32 per cent said that there should.

Emma DeSouza, a campaigner for citizenship rights and vice chair of VotingRights.ie, said that it was “encouraging” to see continued support for extending voting rights in the presidential election to all Irish citizens resident overseas.

She said that the political climate in the wake of Brexit meant that Northern Irish voices were needed in the Seanad because of the political discourse over the Northern Ireland protocol, the part of the Brexit deal creates a trade border in the Irish Sea rather than on the island of Ireland.

“Brexit has undeniably impacted citizenship and identity in Northern Ireland with over 800,000 people now holding Irish passports,” she said.

“As more and more people claim their birthright to be a part of the Irish nation it is incumbent on all of us, but in particular the Irish Government, to engage in a meaningful conversation about how this ever-growing population can be represented and engaged with.”

Noreen Bowden of VotingRights.ie said that the group was confident that that “as Ireland continually seeks to deepen its relationship with the global Irish, that even more people at home will see that extending the right to vote in presidential elections is an important step to take.

“It’s one that will benefit the Irish both at home and abroad.”