As temperatures rise on Friday nearly a quarter of a million Australians have been urged to evacuate. At popular tourist destination, Kangaroo Island, wildlife have been severely wounded in the bushfires. Video: Reuters 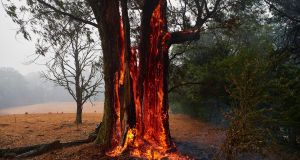 A tree burns from the inside out hours after the fire front had passed in Bundanoon, Australia. Photograph: Brett Hemmings/Getty Images

Today is a wet and cool day in Melbourne, nothing remarkable about this except that it is summer, and we’re in the middle of the most horrific bushfires around the states of Victoria, South Australia and New South Wales. More than 100 fires are still burning around the country with no end in sight.

We arrived in Perth 12 years ago from Cork with our three children. We had to do a crash course on adapting to this dry and sunburnt land. Dodging the occasional brown snake as I cycled on the road and avoiding venomous redback spiders in the garden became part of daily life. One day in Perth I was driving on the freeway and encountered a grass fire blazing, the only thing I could do was get into the right lane and drive past it. Any major bushfires at that time remained in the bush, contained and controlled by the firemen or the “firies” as we call them here.

We're now living in Melbourne and times have changed. These days we are having to learn for the first time what to do in case of a major bushfire – the directions are not to wear polyester or nylon clothes, wear leather shoes and not rubber soles as these would melt. If there is a lot of smoke, wet a t-shirt and wrap it around your mouth to prevent ash entering your lungs. We’re lucky not to need this information right now, but we’ve stored it in our memory just in case. One person warned us about pets burning their paws on the very hot ground when the temperatures hit 40 degrees - these are all things we never had to consider before. As an Irish person, all this is new territory. But now they are tips important to remember as some days the temperatures reach 45 degrees and it is getting hotter.

In Melbourne we are further away from the fires at the moment, but the smoke has infiltrated the urban spaces. Some people here are wearing masks, similar to medical masks. When the smoke is bad, there are warnings not to exercise outside and those with lung conditions are advised to take extra care. Recently, I experienced that smoke-filled air catching in my throat causing me to cough. On these days we were advised to stay inside, close the windows and turn on the airconditioning. Canberra, the national capital, recently recorded the worst air quality in the world.

The worst fires in Victoria occurred on New Years Eve. While we in Melbourne celebrated at midnight, families in Mallacoota were huddled on the beach watching a blood red sky and not knowing where the fire embers would come from next. Mobile signals were failing in these areas as the masts became part of the casualties. Power was cut and terror was the only thing left. Parents contemplated how they would get into the sea and manage their infants in the dark, if need be. The navy eventually rescued some of the 4,000 locals and holidaymakers stranded in Mallacoota.

Our knowledge of bush fires up to had been limited to watching the road signs – a familiar sign that has a dial and a colour scale informing the motorist of the fire danger rating. It is a regular sight around Australia, and in the past, we reconsidered some of our journeys if the dial hit the red or orange. These days there is a total fire ban – this means no outdoor power tools, no coal barbecues and no campfires. We have learned all this over the years and abided by these rules without really understanding the terrible consequences.

But this was year we had to educate ourselves in detail on bushfires and how to survive them. This type of information was not part of our Irish education so we are gleaning all our information from the media. We are discovering unsettling facts such as you hear the fire before you see it as it thunders towards you like a freight train. The landscape is full of gum trees and we have learned they explode when the eucalyptus oil inside them heats up. If we live in a coastal town near bushland, we would need a fire plan and have to make decisions like whether we would stay and defend our property or leave. These are now new parts of our language and our thinking.

Millions of hectares are been burnt nationwide, and the fires will stay burning for weeks in ravines and deep bush areas. It is estimated about a billion animals have died, and some species are feared to become extinct. Farmers are having to bury their livestock in shallow graves to avoid further problems. More than 23 people have died and some are still missing. Thousands of homes are lost, power is cut, and supermarkets are empty in the worst hit areas. There are water restrictions and many communities are cut off as roads are blocked.

Towns like Eden and Mallacoota are like the Irish equivalent of Dingle or Lahinch, small pristine towns that swell and triple in size over the summer months. This is our summer, peak season over the Christmas holidays and many city-siders went off to enjoy the work break and unwittingly ended up in the fire storm.

The stories coming out are of communities pulling together - the town bakeries have stayed open all night while locals kept the “firies” fed. A convoy of 55 trucks delivered hay bales to farmers who had cattle but no feed. Charities have been swamped with donations. Australians have shown their good spirit and generosity in times of adversity. As an artist I will be involved in a charity art auction for the Gippsland area. Neighbours have looked after each other and millions of dollars have been donated.

Something changed here as we rang in the new year and not just the calendar. We witnessed what Greta Thunberg has been warning us about, climate change, but now for Australia it is too late as climate has changed and the eco system is damaged. It is only getting hotter. Through it all I realised how much I love this country and part of my Irish roots are now deeply planted here. I am angry at the prime minister Scott Morrison's lack of leadership, and refusal to address concerns about the ever increasing dry and hot days.

I know these fire affected towns, have made my acquaintance with them. People are hurting and there is much more of the fire season to come. Exhausted volunteer fire services are battling on and we are all trying to help, donate and do something. Something changed this year – something irreplaceable was lost forever as we entered a new decade.

Deirdre Keenaghan, originally from Co Cork, is an Irish artist and writer based in Melbourne