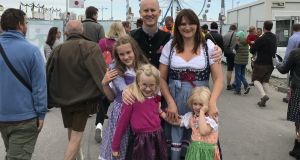 Simon and Niamh Blake in Munich earlier this year with their daughters Julia, April and Nina

Simon Blake is originally from Dublin but now lives in Munich with his wife, Niamh, and their three daughters Julia, April and Nina, who are 11, nine and five. He is marketing director for a US tech company

Weißwurst, bockwurst, bratwurst: Germany – especially Bavaria, where we live – is known for its great sausage selection, but Irish breakfast sausages have never made the list. To overcome this I have always stocked up on the frozen kind before leaving Ireland to head back to Munich: my usual four tubes of pudding and 32 sausages show up like munitions on the X-ray at Dublin Airport.

Leaving Dublin in November 2008 with my six-months pregnant and incredibly sick wife, two suitcases and a cat was, in hindsight, a high-risk decision. Friends asked if I had tripped over the wire and pulled out the plug in the airport – their jovial reference to the Irish economy’s rapid decline at the time – but our move was not economic; it was lifestyle-motivated. I felt incredibly fortunate, however, that we were able to observe Ireland’s financial crisis from afar.

While rules are typically fair here, the absence of any bending of them, and some people’s temperament in enforcing them, can require a high level of tongue-biting

Germany is a great place to live. Everything works as it should, it is very family oriented, and every recreational pursuit imaginable is on your doorstep. The weather is great here, and it is safe, clean and financially strong.

Precision of operation, however, does not come without a cost. While rules are typically fair here, the absence of any bending of them, and some people’s temperament in enforcing them, can at times require a high level of tongue-biting. This is made easier when you can’t argue back like you can in your mother tongue.

This divergence of approaches becomes great fodder for conversation for the Irish community here, a community we largely stoically avoided for years until our two eldest daughters started Irish dancing.

Every Saturday before Covid pushed it online, a group of mainly Irish mums and dads, but also many who have married Irish partners or have some other connection with Ireland, came together. There is Liam from London, Caroline from Carlow, Lise from lovely Dalkey and many more. It was a great 1.5-hour session weekly where we could discuss everything going on “at home” and share the week’s annoying/funny anecdotes of being tutted at for cycling the wrong way on a cycle lane or for making a slight error of wording in a job interview and telling the interviewer we had brought our “Lebensmittel”, or groceries, instead of our “Lebenslauf”, or CV, with us.

And so it happened that I met I a fine young Irish gentleman named Mick. Realising he owned an Irish pub in Munich, I asked early on about his ability to acquire Irish pork products. “You can’t get them, Simon,” was what I assumed was his regular brush-off after years of being asked the same thing by people like me. Undeterred, I continued to ask at random intervals, especially after being encouraged by the production of a catering box of Tayto at one of the Irish-dancing parties. “Not possible” was again the answer.

The message read: ‘Simon, I can get Irish sausages and bacon. You can only buy in bulk – 4kg boxes. They’re going off soon, so the person I know needs to shift them quick’

In 2020, with the sensible option being not to go home to Ireland for a year because of everything virus-related, not seeing family was coming a close second to not getting sausages on the trip home.

Then, on November 28th, I got a WhatsApp from Mick. “Simon, I can get Irish sausages and bacon. You can only buy in bulk – 4kg boxes. They’re going off soon, so the person I know needs to shift them quick.” Two days later we did the drop at his boozer, then sped home to make sure they didn’t defrost and spoil.

So to all my friends and family in Ireland who we won’t see: Happy Christmas. When you are away, you miss everything that makes Ireland a great place to call home. And to Mick: thanks for hooking me up. This year pigs won’t fly.