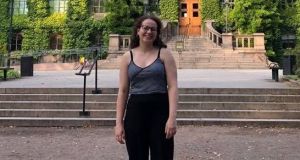 Elizabeth Quinn at Lund University, where she studies, in Sweden

Coronavirus has become a global pandemic, but I’m living in a country that has taken an alarmingly different approach from most others.

I’ve been getting an excellent education in Sweden since I moved here last September – I’m from Galway – to pursue my master’s degree at Lund University. I’m grateful to be here, but I sometimes feel I’m living another life in another world compared with the way things are at home in Ireland.

Even after coronavirus became a clear public-health threat, for example, I was shocked to receive an email from my student-accommodation office that said I could gather with my friends outside so long as it was only a few of us, and that we should enjoy springtime in the city. Lund has students from all over the world, and any of them could have family with Covid-19, so telling us to enjoy spring amid a pandemic seemed insensitive and absurd. And the email didn’t even mention social distancing.

Just going to the supermarket was extremely stressful. Nobody kept their distance there or in the streets, and nobody I saw wore a mask

That, at least, might change after this week, as two days ago Sweden announced its strongest measures to date, including limiting the number of customers in shops and encouraging social distancing.

Until then just going to the supermarket had been extremely stressful. Nobody kept their distance there or in the streets, and nobody I saw wore a mask.

Irish abroad: How have governments where you live handled Covid-19?

Even now there’s no lockdown. Gyms, primary schools and beauty salons remain open. Bars and restaurants are also still serving customers, as long as they offer only table service – which keeps people from crowding around bar counters.

The new advice this week was also for small cafes and similar places to observe social distancing, but it sounds almost impossible to implement, not least because gatherings of up to 50 people (it was 500 before that) are still allowed elsewhere.

So the question is whether these changes will be too little too late. As of yesterday Sweden had reported 5,466 cases and 282 deaths. Ireland had 3,849 cases and 98 deaths. Sweden has about twice the population of Ireland, so although its infection rate is lower than Ireland’s, its death rate is higher, in terms both of deaths per million people and of the proportion of Covid-19 patients who are dying – 5 per cent in Sweden versus 2.5 per cent in Ireland. Sweden’s true infection rate is also believed to be higher than the official figure, because of its limited testing of vulnerable groups.

The Swedish government has asked its public-health agency to increase testing, so that it can stop people who have the virus but are asymptomatic from going to work. If the virus is not contained in Sweden it will, as it has in other countries, lead to a public-health emergency. No public-health system is equipped to deal with so many cases at the same time.

My university courses are now online, although the university library remains open (with social-distancing measures in place), and a ban has been placed on visiting nursing homes. As Lund is a student city there are fewer people around at the moment. Most of its Swedish students have returned home and are completing their studies there. Even so, the streets here are nothing like the deserted ones across Ireland.

Sweden’s approach has been explained by its decentralised government: it is the public-health agency that decides how to combat the virus. But I find it odd that its expert advice differs from that given across Europe by other health authorities. The agency has not escaped criticism here in Sweden, particularly for not doing enough to prevent people travelling to ski resorts in the north of the country over Easter. Those resorts closed for business this week, which at least mitigates that criticism.

The Swedish approach has also been explained by people’s trust in their government and each other to behave reasonably. A lot of Swedes I’ve talked to say that if the government needed them to act it would introduce more stringent measures and that they would then follow them. A lot of people have also voluntarily self-isolated. They rely on each other’s common sense. But, as the saying goes, common sense is not generally common. I was especially struck by this as someone tried to shake my hand to introduce themselves today. I don’t think an awareness of how easy coronavirus is to transmit, and how deadly it is, especially for vulnerable people, has penetrated people’s minds.

The Swedish prime minister, Stefan Löfven, said 12 days ago, in an address to the nation, that stricter coronavirus measures may need to be introduced at short notice. I wonder if this week’s changes will be enough to stop the spread of Covid-19. If they have come too late it will have catastrophic effects on human lives.