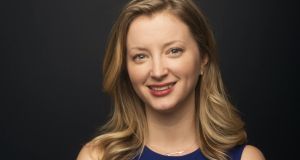 Christine McKenna-Tirella is a casting specialist in New York.

From Bangor to Broadway, casting specialist Christine McKenna-Tirella is weathering the coronavirus storm thanks to a timely career move. The casting director and talent specialist moved to New York in 2006, after graduating from Queen’s University Belfast with a law degree.

“I always loved America, having spent childhood summers travelling around California, Nevada, Virginia, Florida and New York with my family.”

She made her first tentative move on a student visa after being accepted to the American Academy of Dramatic Arts in New York. “Fourteen years later, I’m still here.”

After finishing drama college, McKenna-Tirella worked in “traditional” casting, finding actors for projects across a variety of mediums including commercials, television and film. But most of her work was in theatre.

“I worked in various casting roles. From casting assistant at Paladino Casting, which focuses on print campaigns, reality TV and live events such as fashion week to casting director for La Mancha Films, the award-winning indie film company.”

A role at Harriet Bass Casting – a leading independent New York casting director – involved casting for regional equality theatre and off-Broadway theatre projects across the US.

In 2017 McKenna-Tirella got a job as casting director for Stewart/Whitley, which also saw her work on high-profile national theatre tours, as well as several television and film projects.

Highlights from the past decade include the Broadway production of Chicago the musical, off-Broadway projects include A Clockwork Orange, As You Like It (Classic Stage Company) and Dirty Dancing (national tour), SpongeBob the musical and many more.

In 2019 she moved from “traditional theatre” casting to casting for film and television for Backstage casting agency.

“I work with the business development team on leads for new and returning casting opportunities and partnerships. I am also part of an internal advisory team on development of new software including virtual auditions. During the pandemic I have been hosting panels, workshops, podcasts and interviewing fellow casting professionals.”

Taking on the role turned out to be a very timely move. “Ever since lockdown in March, Broadway has been closed and will remain closed indefinitely. Ninety per cent of the people I know in the industry are unemployed at the moment, so I’m glad I segued into TV, film and voiceovers.”

Until this year, New York was the hub for casting in theatre. “It was the absolute epicentre. Even regional theatres would travel to New York to find their talent. But for the foreseeable future, it’s not economically viable for theatres and shows to open to a 25 per cent audience. The industry has been decimated and it has been absolutely heartbreaking to watch it all shut down.”

McKenna says the US elections, civil unrest and the coronavirus have ensured that this year is one like no other in the city that never sleeps.

“It has been surreal. Back in April, when I was training for the half marathon, I ran over the Brooklyn bridge, across the East Village and around Manhattan. There were no cars or people around and I was running in the middle of the road. I never thought I’d see anything like this in my entire life.”

But she counts herself very lucky to be able to work from home. McKenna-Tirella and her wife, Valerie, who married in Northern Ireland in 2018, bought a house in New Jersey and have settled in “a great community”.

“There are silver livings. Suddenly we didn’t need to be in the city for work and pay high rents. Our favourite places were closed, some temporarily, some permanently.

“So at the end of the summer we moved to Atlantic Highlands, a commuter seaside town. There is a big Irish-American community here – a lot of Irish flags flying in people’s yards, an Irish dancing studio in the town centre and a Hibernian Hall in the next town over. When we go back to ‘normal’, my commute will be a 45-minute ferry ride instead of the subway each day.”

McKenna-Tirella started on an occupational professional training visa. “From that, I leveraged my network and relationships in New York to get more work.

“Visas are daunting, but my advice would be don’t underestimate your experience or talent and put the paperwork together and see what happens.

“I believe there is a reason for the saying; ‘If you can make it here, you’ll make it anywhere’ – both because it’s a competitive city, but also because it is incredibly and special rewarding too.”

Irish people do very well in the US, but they could learn from the Americans and be less modest, she suggests.

“We are used to not wanting to take up too much space and I think we need to work on that. We should present our ideas and have faith in ourselves. That’s what the Americans do and it works. Confidence gets you places.

“I think there is a better work-life balance in Ireland versus America. I miss the Irish sense of humour and the warmth and sense of community, even with strangers. Also, tea doesn’t taste the same.”

McKenna-Tirella is very involved with the Irish community in New York, even though events have slowed down a little. “The Irish Embassy used to have a networking event for the Irish community every Friday; which I hope they can continue post-pandemic.

But it’s hard being away from home, this year particularly. “With Christmas around the corner, Irish people all around the world are missing home so much more this year.

“We normally try to come home at least once a year, and this year it has been very hard not being able to travel to see my mother, who still lives in north Down. And she cannot come to the States because of the Covid-19 travel restrictions.”

Yet, despite everything, McKenna-Tirella believes there’s life in New York yet. “This city has a pulse and you can’t kill it. It’s a melting pot of cultures and perspectives and it has a very special energy. It’s a city like no other so it’s always going to be special, no matter what.”