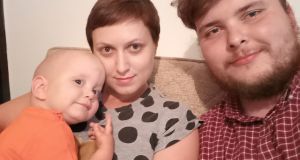 Oscar Brophy from Ballyheigue, Co Kerry with his partner Hanka and their baby Miško in Bratislava

Lockdown 2: Electric Boogaloo is in effect in Slovakia. Comedy is dead, restaurants are only allowed to do takeaways, bars are shut, masks are mandatory at all times outside, yet schools and borders remain open. Mr Covid is resurgent, kicking back and relaxing in people’s nasal cavities while laughing at us.

Life had been ticking along nicely in school until last week when there were a few Covid contacts among the staff. On Wednesday morning, I went for my second-ever, yet probably far from last, Covid test. I’m negative, but I had no idea my nose went back that far. They should definitely start giving out loyalty cards because I’m not dishing out €80 every time this happens. Maybe if your do four tests, you might get your fifth free. I feel that Mr Covid has turned us all into surfers, riding his waves and hoping we come to shore.

Before the schools are potentially shut - either by governmental decree or because too many students and/or teachers test positive - I’m getting to know my new students and getting reacquainted with the ones I haven’t seen since last March. The Matušes and Dorotkas and Mareks and Lenkas of Bratislava all seem to be dealing with the Koronakríza (Corona crisis) well. They have become far better Fortnite players to hear them tell it. I am still a noob.

Kids aren’t as antagonised by wearing masks as I had expected. Every day is now like Halloween and the costume is always the same

I teach in a school with over 1,400 potential little superspreaders running around, so I am very happy that all staff and students are wearing masks, sanitising our hands often and having our temperature measured when we walk in the door in the morning. If I was smart with my money I would have bought stocks in hand sanitiser and thermometer companies when all this started blowing up. Instead I bought a PS4.

Kids aren’t as antagonised by wearing masks as I had expected. Every day is now like Halloween and the costume is always the same. Whether we actually contract the disease or not, Mr Covid has affected everyone’s life such is the extent of his powers. But this is as close as we will get to a Halloween this year.

Schools are open here under what is called the traffic-light system. If all is well, the status of the class is green. Yellow if someone in class has symptoms or has been in contact with someone and is sent home. If they test positive that light goes red and the class is sent home. Schools are practicing a sort of group social distancing here. Staggered lunch times and staggered outdoor breaks aim to keep contacts between children in school to a minimum.

Slovak beef and milk might not be the same quality we’re used to in  Ireland, but they can really work magic on a pig

During the first main lockdown most of the students seemed to have gone back to their grandparents’ house in the east somewhere, passing their days eating plum cakes and pork schnitzel. Slovak beef and milk might not be the same quality we’re used to in Ireland, but they can really work magic on a pig.

We had a brief run of comedy and music shows over the summer. In June I oversaw the inaugural live show held anywhere in the world of North Kerry Noise music label Dollar Pickle Records - in essence, I DJ’d a noise music show in a basement to a crowd of four people. We had five or six really, really good stand-up shows and we got more people than usual in attendance as they were in effect a captive audience since major gigs and holidays were off the cards last summer. We hosted Romanian comic Victor Patrascan and Ireland’s own Joe Rooney and Terry Norman for a string of barnburner comedy nights. All this seems like a distant memory now.

I think in the minds of many people around the world this pandemic has shifted from apocalyptic change in our collective quality of life to rigmarole. Annoyance, background noise. But stay vigilant brothers and sisters as to coin a phrase “winter is coming”. The asymptomatic among us will be coughing and spluttering all over the gaff, with regular seasonal illnesses and Mr Covid will like this, as he will get to go into our throats and reproduce. Mr Covid is a sick man with lecherous designs.

My partner’s 90 year-old grandmother tested positive a few weeks ago. Her symptoms are thankfully very mild, although her eyesight has deteriorated somewhat. Mathilda survived the Germans, the Russians, the break-up of Czechoslovakia, the release of the Star Wars prequels, the 2008 financial crash and now the Coronavirus. She’s been sequestered from contact with a lot of her family since this began and she still managed to get sick. Which goes to show that despite your best efforts, Mr Covid is a sneaky man with a sneaky plan.

If you want to see what Oscar gets up to as he rambles around Bratislava, you can follow him on Instagram @laszlopanaflax or read his previous outing on Irish Times Abroad

When is the best time of day to exercise: 6am, 1pm, 9pm?
Real news has value SUBSCRIBE