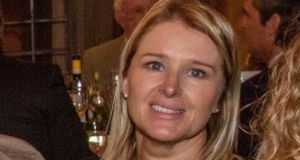 From Belvedere Place in Dublin’s north inner city Dublin, Clodagh Lawlor was one of a family of six and credits her late father Leo, a worker in Dublin Corporation, with fostering her love of Italy.

“He was a baritone singer and loved Italian music and he was always asked to sing at conferences, communions and weddings,” she recalls. Since 2011, Lawlor has been living and working in Italy just outside Florence in a small village called Poggibonsi.

“It is strategically placed right in the centre of Tuscany, 40 minutes from Florence and 20 from Sienna, and is a very inexpensive place to stay – tourists don’t really know about it. I love Florence but this village is more like Postman Pat land because it is small and everybody knows everybody else,” she says.

The city is so beautiful, like a film set, every corner you turn there is something else to admire

Having always had a desire to travel, she ended up in Dubai in 2002 working as a project manager for an architectural firm building the country’s first Ikea store. Her flatmate, a South African sculptor, brought her on a holiday to Florence “and it was there that I met my Italian husband to be, Simone, and moved to live in Italy in 2011 when our son Matteo was born”. Their marriage, due to be celebrated this year, is “con calma” because of the pandemic.

Simone took over his father’s insurance agency in Poggibonsi, while Lawlor found work with a PR company in Florence. It was while working there that she met Linda Falcone, director of the AWA (Advancing Women Artists) foundation, who needed help with public relations and outreach programmes. “I have been working with them for the past two years part time as well as in property management,” she says.

AWA was started by the American author and philanthropist Jane Fortune, who had come to Italy, fallen in love with Florence and was cultural editor of the Florentine, an English language newspaper in Tuscany. She became an authority on the art of women in Florence.

“She found hidden treasures all over the city and restored them one by one with a female team – paintings from the Renaissance up to the 20th century” explains Lawlor.

Sixty paintings have been restored, the most impressive of them the 6.5m-long canvas The Last Supper, a masterpiece by a self-taught painter, a nun, Plautilla Nelli, now on display in the city’s famous Santa Maria Novella church. Nelli, who lived in the 16th century, created one of the largest works by an early woman artist and defied social convention by authoring 13 lifesize male figures and confronting a theme usually reserved for male artists at the height of their career.

Lawlor has learned a lot about Florentine art and feels blessed to be able to highlight the work of hitherto overlooked women artists.

“The city is so beautiful, like a film set, every corner you turn there is something else to admire. During the pandemic it was eerie because you got to see things without the millions of tourists.

“People are very open in Florence whereas in Sienna, a walled city, they are more reserved,” she says. “As for those famous Florentine steaks, my brother on a visit from Dublin was horrified at the blood when he first saw them,” she laughs.

“We have a wonderful lifestyle; we go skiing in the winter, and in the summer there are the beaches and the mountains. Italians love life and travel, and tend to stay in Italy because many have second houses. You can plan here because of the weather unlike in Ireland where it is more unpredictable, though Italians are enamoured of Ireland.”

Everyday life is very different to home, she says. “They drive too fast here and are very chilled out. It’s no big deal if you have an appointment at four and they don’t turn up for half an hour, but you get used to it.

“If you go for a coffee, it is an espresso and you are in and out the door. Nobody in Italy except tourists has cappuccinos after 12. Aperitivos for €5 come with little things to eat – I have had far too many of them. Cheese and honey with truffles are absolutely gorgeous and the wine is wonderful here,” she enthuses.

On the other hand, “Italians have no idea about queueing, Simone couldn’t believe the way we queue in Ireland”.

Matteo, now nine, is bilingual. He starts school every day at 7.55am. During the lockdown, he got “masses of homework on his iPad and, being an only child, missed his friends and having no one to play with, but they had Facetime calls to keep in touch”.

Simone works from 8am-8pm locally with a siesta in between and was able to continue during lockdown. Outside of work, “he hunts wild boar from November to January and loves hunting, cycling and swimming, he is a real sportsman,” she says.

Italians, according to Lawlor, take their health very seriously and “like Ferrari cars, they get checkups for this and that”.

She returns to Ireland every August when the heat gets too much for her but, having a large extended family, she is also used to visitors from Ireland in her Italian home. She met the artist Paddy Campbell in Florence where he has a studio and was interested to find out that he was born in Gardiner Street near her own Dublin birthplace. His marble sculpture of a Madonna and Child will be going to a famous Florentine museum, the Museo degli Innocenti on permanent exhibition shortly.

“Coming to live in a small town where everybody knows everybody else was difficult at first so it wasn’t easy particularly when Matteo was born and I couldn’t speak the language.

“I struggled at the beginning, I missed my family, but now I really love it, though it took time.”