The Dublin comic might quit after his run-ins with Ian Wright. Nadine Coyle looks far happier 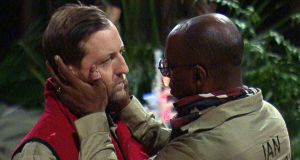 I’m a Celebrity: some viewers feel Andrew Maxwell has been bullied by Ian Wright

There haven’t been many chuckles in the jungle for Andrew Maxwell as this year’s I’m a Celebrity… Get Me Out of Here! approaches the fortnight threshold. The Dublin comedian’s tropical tryst, having started positively, has now travelled farther south than a migrating humpback. Embattled and overwrought, he has spoken openly about quitting.

One talking point is his relationship with Ian Wright – viewers feel Maxwell has been bullied by the Arsenal icon. “I thought I was going to walk out at some point,” a shaken Maxwell had confided to James Haskell, the rugby star, during the week. “God, have I done the right thing? It’s a massive head fudge, this show.”

Andrew Maxwell has had to sleep on the ground, eat the same boring dinner night after night and sit through repeat visits from Ant and Dec. You’d be at the end of your tether too

Deprived of sleep, subsisting on beans cooked by kitchen-confident Z-listers and missing his family, Maxwell quickly lost his affability. And, although he doesn’t have much of a temper, he flared up at Wright at one point, feeling the former soccer player had been short with him. But he immediately backed down, explaining that exhaustion was stoking his irrationality.

“You’re tired, you’re down,” is how he described his feelings to Haskell. “Thoughts you don’t care about normally get in your head.”

Maxwell always seemed an unlikely candidate for three weeks of bushtucker trials and pretending not to be annoyed by random former Coronation Street stars. Quite how much he is being paid for his ordeal is unclear. It is reported, however, that Roman Kemp is getting £40,000, or about €47,000, and Kate Garraway £75,000, or about €88,000. Maxwell’s compensation, one is tempted to guess, lies is somewhere in the middle.

But even assuming he is pocketing something like €60,000, is it worth it? He’s had to sleep on the ground, eat the same boring dinner night after night and sit through repeat visits from Ant and Dec. You’d be at the end of your tether too.

Perhaps life in a pop group has prepared Nadine Coyle for sleeping among vipers, opportunists and egotists

His discomfort became especially clear when he found himself squaring off yet again with Wright later in the week. Maxwell was accused of not pitching in, having nodded off when tasked with washing the dishes with Caitlyn Jenner.

As Wright laid into the 44-year-old comic, the internet had a very mild meltdown. Out in the real world, though, Maxwell’s wife gave short shrift to bullying claims. Maxwell and Wright had become “jungle wives” and were “just having a lot of tiffs”, said Suraya El-Wakil. She added that her husband could be a handful and that persuading him do the dishes was always a push uphill.

Nadine Coyle of Girls Aloud is faring better as the other Irish contestant. That’s a surprise considering how quickly she turned to jelly in episode one when required to jump out of an aeroplane (with a parachute).

Still, she has pulled herself together impressively, and there are moments when she almost appears to be enjoying it. Maybe it’s the £250,000 – or just under €300,000 – she is reportedly receiving (placing her second, behind Jenner’s £500,000 pay day). Or perhaps life in a pop group has prepared her for sleeping among vipers, opportunists and egotists. Poor Andrew Maxwell, in contrast, looks all at sea as his tropical imprisonment rumbles interminably onwards.

The Irishwoman looking after refugees' wellbeing in Berlin
3