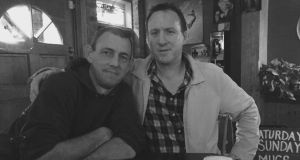 Michael Fitzpatrick and Robbie Walsh on a night out in 2016, just two weeks before Robbie’s passing

Michael Fitzpatrick, from Lucan, Co Dublin, lives in New York with his wife, Mei, a nurse practitioner at a Manhattan hospital and their three children; Liam (11), Emmett (8) and Fiona (5). He is a playwright and journalist. In 2016 he lost his friend Robbie Walsh. The pair had attended school together in Celbridge, Co Kildare, before moving on to New York where they rekindled their friendship

You’d have had to squint along a drizzly Queens Boulevard to have seen the Manhattan skyline on that grey November morning. Occasionally, the drabness was broken by a light sprinkling of green as a steady stream of mourners, wearing their New York Shamrocks shirts, scarves and hats, made its way from Saint Sebastian’s church in Woodside to Sunnyside’s Courtyard Ale House, the club’s unofficial headquarters.

It was this crowd, that peppered the grey morning with dashes of an emerald, or rather a shamrock tint to remember one of their own.

On the pitch, he could superbly marshal a bunch of weekend footballers, and mould them into a passionate winning machine. He just couldn’t hang wet towels, or have his socks actually land in the laundry basket.

Were they his Shamrocks socks, they’d have been folded, ironed even. Dry-cleaned, if he could get away with it without the lads finding out, so proud was he, of his club. His ‘Player of the Year’ awards and framed photos of champagne-soaked teammates on New York playing fields stood proudly on a shelf in this, his tiny portion of America.

I’d been to Robbie’s apartment. As a Liverpool supporter, I’d slag him over the Manchester United poster on his wall. In our late twenties, we were older than most players in the picture. He didn’t see them as soccer heroes though, simply footballing contemporaries who played for another team - although he did name his dog ‘Rooney’ after United’s captain, Wayne.

Pele is one of a few players to have had their shirt number retired by their club. Robbie Walsh is another

Robbie Walsh and I had attended Salesian College, Celbridge together, back in the late 1980s. We’d bump into one another occasionally, until years after leaving school, I met him one night in a bar in Leixlip.

We found that we both had New York on our respective horizons. He planned to emigrate, I fancied a three-week holiday (which I’m still enjoying, 23 years, a marriage, a mortgage and three kids later).

Having arrived in the US later that year, my accidental rendezvous with an old schoolpal long-forgotten, I sampled the bar scenes of Hell’s Kitchen, the East Village and the Upper West Side, until one Friday night, I decided to check out Sunnyside, Queens, once a predominantly Irish neighbourhood.

I’d grown accustomed to the Manhattan lifestyle, so it was an ironic culture shock for this seasoned New Yorker of two whole months, when I arrived in Sidetracks, a popular venue on Queen’s Boulevard, to hear tongues more native to Ballina than Brooklyn.

Being careful not to brush against the wrong shoulder, I ordered a beer, and ‘people-watched’, until I noticed a guy in a green baseball cap, clearly ‘person-watching’ me.

When you’re 3,000 miles from home, the words “Jesus, Fitz, what are you doin’ here?” in the strongest Kildare accent this side of Newbridge, can really knock you sideways. Robbie and I had reconnected once again.

Working for The Irish Echo as a sportswriter, I promised I’d go see his team, the NY Shamrocks play, and write about them for the paper.

I arrived at Downing Stadium on Randall’s Island that Saturday. Pele had played there for several years, as part of the much-storied New York Cosmos. The three-times World Cup-winner, and for many, the greatest footballer who ever lived, is one of a select few players who once played at Downing Stadium to have had their shirt number retired by their club. Robbie Walsh is another.

I saw him tackle, break up attacks, head away corners and bark orders at his teammates. He wore the number 14, which he’d also worn back in 1990, when he’d hit the crossbar in the Leinster Schools’ Cup Final, which our school, Salesians, managed to win.

That weekend, in a draw with rivals Gottschee FC, Robbie played out of his skin. I approached another spectator. “The number 14,” I asked, “is he always this good?” “No,” he replied. “That’s just Robbie, the captain. Usually he’s even better.”

We had outrageous nights in Manhattan clubs and quiet pints in Queens taverns. We’d look out for one another, in the way that only immigrants do

We had outrageous nights in Manhattan clubs and quiet pints in Queens taverns. We’d look out for one another, in the way that only immigrants do. He even got me a construction job once, when I was between writing gigs.

One night, when ‘chatting-up’ a few, seemingly ‘well-connected’ Connecticut girls, I witnessed Robbie try out some dance moves. Only, he wasn’t dancing. He was demonstrating tackles he’d made in the previous Sunday’s game. Tiffany and Britney weren’t amused.

Then one October night in 2016, we met for the last time. We’d tried a few bars, but so popular was Robbie that everywhere we went, someone would approach us to chat, so we found a quieter spot. For five hours we talked and laughed.

I got the call, two weeks later.

Nineteen years after he’d emigrated, Robbie Walsh collapsed on a Queens street on his way to work. A number of strangers, including a young boy, who jumped off his bike as he rode to school, rushed to help, but it was to be in vain.

That night, I went to Elmhurst Hospital. Amidst the tubes, monitors, pumps and ventilators was my friend. A long way from any soccer pitch.

I squeezed his hand, kissed his forehead, told him that I loved him and thanked him. For being that pal, that smiling face. For the pints, laughs and support in a strange land.

Nineteen years after writing about his performance on a soccer pitch, I wrote Robbie’s eulogy

The funeral was extraordinary. A guard of honour, from his heartbroken teammates. The green that lit up a grey morning. Bar-owners, construction workers, waitresses, bus-drivers, musicians, all turned out for this adopted New Yorker with the heart of gold and a Straffan twang he’d never lose.

Nineteen years after writing about his performance on a soccer pitch, I wrote Robbie’s eulogy. His last text to me, sent the night we’d met up: Fitz, Thank you. Had a great time. So did I pal. So did I.

Four years on, all six Shamrocks sides, men’s and women’s teams, still have his initials, RW, placed above the crest on their famous green shirts. I wonder will Pele get that treatment one day.