March 20th, 2020: US president Donald Trump threw a tantrum over a question on peoples fears of Covid-19 at a White House press briefing. Video: The White House 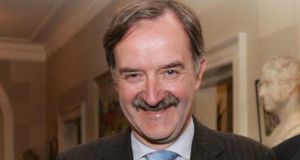 The United States is showing every indication it will outstrip China in coronavirus cases, and is already “not far behind them”, according to one of its leading medics Prof Garret FitzGerald.

The US is about to experience a surge in cases in a scenario where President Donald Trump delayed taking decisive action, and squandered early advantage he had secured by default, added the University of Pennsylvania professor of pharmacology and therapeutics.

Referring to Trump as “the lunatic in charge”, FitzGerald said that by restricting travel from China for largely xenophobic reasons he may have bought time, but subsequent delays on testing and restrictions undermined this. “He continues to send mixed messages,” FitzGerald said.

Trump’s failure meant the most effective strategic response came at state level, with key governors dictating necessary pace. FitzGerald cited New York Times analysis showing that awareness was behind in other states, a disparity between red (Republican) and blue (Democrat) states, with the latter scaling up action. “The irony is Trump supporters paid the price for his mistakes.”

He questioned how many extra deaths would be due to delays and misinformation. The president has continued to describe chloroquine drugs used to treat malaria and other conditions, as “game changers” in the fight against coronavirus, also known as Covid-19, when there was no proper study to show they work, noted FitzGerald, who is originally from Ireland.

Their use on the disease was “nothing more than a suggestion in a tiny study with a lot of flaws in it”, he said. Trump’s talking up of hydroxychloroquine led to a big rush on the drug, which works well for people with lupus. This resulted in many people taking it as a prophylactic (preventative) when it was a toxic drug and potentially fatal.

In response to misleading advice from the French health minister Olivier Véran, FitzGerald has a letter in the latest issue of the research journal Science, highlighting how he wrongly issued a warning on painkillers – notably nonsteroidal anti-inflammatory drugs (NSAIDs) on which he is a global authority.

His letter had gone viral through social media channels. “So that is good. It was a silly thing to say at several levels,” he said, “In a sense, it was like Trump’s ignorance of science.”

Véran confused matters by claiming on Twitter that anti-inflammatory drugs like ibuprofen or cortisone could aggravate coronavirus infection – when people taking NSAIDs for other reasons should not stop doing so for fear of increasing their coronavirus risk.

He advised people to take paracetamol (acetaminophen) instead to treat a fever but this only added to confusion, given it is also an NSAID.

Flawed advice was being compounded by fake news and irresponsible behaviour, FitzGerald said, citing reports that four young people taking NSAIDs for sports injuries were in ICU in Cork.

It added up to “a fusion of unreality” and was a wake-up call for the public on “why pervasive ignorance of science comes at a price. Trump is the ultimate metaphor as far as that is concerned.”

Healthcare workers were displaying remarkable dedication and bravery in a similar way to Ireland, while the scientific community had been mobilised on rapid development of vaccines; new drugs and apps to monitor and advise people. But there were specific dangers in the US scenario.

There were long delays before rigorous separation was implemented. Its health system was fragmented, varying between best healthcare and none. There was rowback on Obamacare in a system where too many had no health insurance and “uneven sick pay”, motivating many people to go work.

This was in a country where there was a gun for every sentient human being, now seeing a surge in gun purchases. If cases explode and there are supply chain issues with food, medication and equipment, there was a risk of violence.

FitzGerald said there was a lot less social cohesion in the US compared to Ireland but stressed he was outlining a worst-case scenario.

He is scaling down research at his facility while helping a national effort to ramp up coronavirus-related research and share vast amounts of data in a harmonised way – all done remotely.

This will involve work on hundreds of thousands of patients post-infection, to identify key contributing factors to spread and infection. This had to be done in a safe way not to impair front-line clinical work.

As he is in a higher risk age group he will not be on the front line but expected to be “called up” to deal with patients “back from the front line”.

He added: “We’re very fortunate. We see what’s coming. We can work remotely, and have sick pay and health insurance. We’re at the elite end of the vulnerability spectrum.”

Those most at risk were vast numbers of people with no health insurance – separate to those who were homeless.

FitzGerald feared Dr Anthony Fauci, the top US expert on infectious disease who is helping to lead the national response, would be fired by Trump.

Republican business interests were pressurising the president to allow people go back to work. “Fauci won’t accept that. We will see.”

He advised caution in making comparison between countries especially on death rates as much of the data depends on extent of testing, but looking at what was going on within countries was of value. “At least, within China, South Korea and Italy they [cases] may be flattening.”

Choux polish: A Bastible chef’s recipe for a show-stopping pastry
5