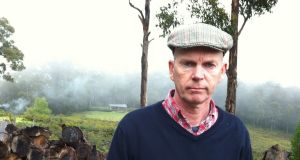 Philip Lynch: ‘No disrespect to the ailing Mr MacGowan, but I’m fairly sure I won’t be dusting off my Best of the Pogues CD this Christmas Eve’

I first flew with Aer Lingus one July morning, back in 1985. I flew from London to Dublin. I was heading “home” from Melbourne to spend a few weeks with my family in Westmeath. Boris Becker would win Wimbledon that summer, and Geldof’s audacious Live Aid concert at Wembley stadium was garnering saturation coverage on the television screens. I had barely time to recover from my jetlag when I had to return to Melbourne.

I was seated towards the front of the plane. It was a cramped affair, and the large man sitting next to me was hogging our shared arm rest like it was exclusively his property. But I wasn’t bothered. Outside, it was all brilliant sunshine, and I could barely contain my excitement about drawing so close to Ireland again.

I recall being struck by that plane’s interior décor; green seat covers emblazoned with some nifty Celtic design, the flight attendants’ predominantly green uniforms, and of course, the cabin crew’s unmistakable sing-song Irish brogues. After living amongst the distinct and ubiquitous Aussie Strine for two years, these once familiar accents were washing over me like some kind of soothing salve.

I had left Ireland two years earlier, in somewhat fraught circumstances. I had left, against the backdrop of my mother’s grief, my father’s muted silence, and like so many of my forebears, I had left on a crowded overnight ferry to Holyhead. Emigrating had felt like my only realistic option. So off I went, blithely and willingly enough, with my modest savings and meagre possessions, with vague notions of maybe making something of myself in another country, elsewhere. Little did I know that I would end up spending the rest of my days in Australia.

By the time I boarded the Aer Lingus flight that July morning, I had garnered a start, of sorts, nursing in mental health in Melbourne. I remember sitting back in my seat and watching as a tall, elegant, smiling flight attendant with red lipstick, a young woman in her mid-20s, strode down the aisle, handing out fresh copies of the Irish Times. I could hardly believe my good fortune. Some light refreshments and a free read of the previous day’s news, and before I knew it, I would be landing in Dublin, where I knew my father and probably some of my younger siblings would be waiting shyly in arrivals.

Alas, to my dismay, the attendant’s largesse came to an abrupt end, well short of where I was sitting. As, moments later, a curtain, also emblazoned with some Celtic design, was unceremoniously drawn across the aisle to separate us plebs from the first-class passengers. I may not have been travelling on the ferry, but to all intents and purposes, I was still a budget traveller, and I would do well to remember my station.

It has taken me much time to finally appreciate the trauma that is implicit in emigrating. For a long time, I was reluctant to commit to Australia. I always imagined my future surely lay in Ireland with my kith and kin.

Michael O’Loughlin’s excellent recent article in this newspaper certainly struck a chord with me. O’Loughlin is hardly the first writer to highlight this issue of trauma and social dislocation in the migrant’s journey, and he won’t be the last. Brian Friel’s Dancing at Lughnasa is just one fine example of lost lives abroad in the Irish diaspora.

I am more than content to stay at home here in rural Tasmania. I will gladly eschew all those arrival and departure lounges

Perhaps the fact that my going was framed in an economic imperative, not a psychological framework, hindered my capacity to recognise my own dislocation and trauma. Perhaps sentimentality – all that longing for Ma’s soda bread and Barry’s tea etc and such mawkish themes cloud our ability to recognise the trauma in our emigration stories.

As yet another Christmas rapidly approaches here in Australia, and yet another year slides past, I am now confident that I have finally broken free of the psychological shackles of Ireland. I have finally subdued my tendency to evoking maudlin memories at this time of year. I have laid all those images of my late mother’s late night Christmas cooking heroics to rest.

No disrespect to the ailing Mr MacGowan, but I’m fairly sure I won’t be dusting off my Best of the Pogues CD this Christmas Eve. And, Covid-19 notwithstanding, I certainly have no urge to fly half-way around the globe to spend the festive season in Ireland.

To be frank, I have no inclination to go anywhere, not even to Melbourne where I lived for several decades. These days I have made a peace of sorts with my migrant journey. I am more than content to stay at home here in rural Tasmania. I will gladly eschew all those arrival and departure lounges.

There are, inevitably, clear skies and abundant sunshine at Christmas time in Australia. And, I fervently hope, the prospect, real or imagined, that 2021 will eventually usher in better times for humanity everywhere.