Working Abroad Q&A: 'I didn’t want to go back and have to start from scratch' 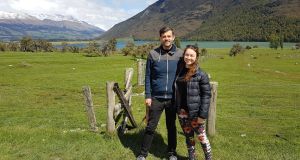 Roy O’Hara his partner Jenna Wiggill in Paradise near Queenstown

Working Abroad Q&A: Roy O’Hara, who is originally from Leitrim, lives in Auckland where he works as a sales manager for car-hire firm GO Rentals.

This year marks the 10-year anniversary of me leaving Ireland. If I am honest, I was in a rut and not going anywhere with my life. I didn’t realise it at the time, but I was depressed, working, socialising, sleeping - rinse and repeat. I had a good job in banking at the time, but it seemed like a good chance to get out of my comfort zone and try something new. I had spent time in Canada before, but as I was getting closer to 30, it was a now or never moment to get a visa. It seemed like everyone I knew was going to Australia, but I thought, what was the point in trying to change my life by following everyone else? So I decided on New Zealand.

You were working in banking?

When I was growing up in Carrick on Shannon it seemed like we had two choices as kids for pocket money - work on the boats or in SuperValu. I chose the latter and loved it! I must have left there four or five times, but kept coming back, starting as a bag packer, then trying my hand at everything from the back store to butcher and whole lot in-between. I loved the day-to-day meeting and talking to people and must have known everyone in the town by the time I decided to move on. Next step was MBNA servicing credit cards in the UK and Ireland markets. It was a totally different experience to face-to-face customer service, and so much easier.

You worked in a call centre in New Zealand. How was it?

When I got to New Zealand I told myself I wanted a job with no responsibility, a simple Monday to Friday 9-5 that I could cruise through and not have to worry about outside of work. The plan was to spend six months in New Zealand and then travel on to Oz and head home to Ireland. I did find a simple, minimum-wage job as planned, but I kept getting the chance to grow within the business, and within 18 months I was managing the entire Inbound Department of over 150 people and was working on my residency application. Not quite what I had planned, but it did mean I got to extend my stay in New Zealand, and take in the Rugby World Cup, getting to all the Ireland games. I loved managing so many differing and diverse people and took great pride in seeing them come in and progress through the ranks.

Call centres are known for paying low wages. Is that the same the world over?

Yes and no. It depends on the role you are in, and the industry. When I started off in New Zealand I was on the minimum wage, and I know a lot of call centres continue to do that. In my current role at Go Rentals, we start people above the minimum, and intend to move to paying the living wage.

While I might technically be in the car rental industry, in reality I work in tourism. In a country such as New Zealand, that is a hugely exciting and challenging industry to be part of. Coming into it, I completely underestimated the complexity of what I was taking on. Tourism is New Zealand’s biggest sector, and reaches into every corner of the country. I’m lucky with the company I work at now, they genuinely care about both their staff and customers, while also focusing on being progressive and future thinking.

Over the years, the numbers of Irish have decreased, but those who have stayed have done well for themselves

Can you give us an example of ‘future thinking’ in car rental?

As an industry, if you sit still you will be passed by. We recognise that and have spent a lot of time on being market leaders, not just in New Zealand, but worldwide. We have self-service kiosks in our branches, and earlier this year we launched an end to end process on our app. You can complete all the pick-up and drop-off information in the app, you simply show up, flash your driving licence, grab your car keys and are good to go.

Is being Irish helpful in the tourism industry in New Zealand?

I have to talk to people from all over the world, so having the gift of the gab is a plus. Having come to the country as a tourist also helps me look at the country with a different lens and put the customer first. And there are plenty of other Irish people in the industry, I will always latch on to the accent and see how we can help each other out.

Do the Irish fit in well in in New Zealand?

In the years after the World Cup there seemed to be Irish people working everywhere. At one stage, I was working with almost 20 in a contact centre. Part of that was probably my propensity to hire Irish people, but, they were all over-qualified and just happy to have any job for the year or two they intended staying in New Zealand. Over the years, the numbers of Irish have decreased, but those who have stayed have done well for themselves. Everyone I know still here has progressed in the companies they work for, and I am always meeting new people in senior roles in other businesses here.

Totally! A few years ago, when I was getting the seven-year itch, I investigated returning to Ireland and talked to a lot of companies, but every agency I talked to only wanted to put me forward for junior roles. They didn’t want to consider the experience I had gained over here - and for me, changing from managing hundreds of people, to going back to be a team leader on rostered shifts, was never going to be an option. I had come to New Zealand and started from scratch here, I didn’t want to go back and do it all again.

Us Irish seem to stick together, and most of my closest friends here are either Irish or English. It’s funny how it happens, but then again New Zealand is a country built by immigrants, and I have known most of them since they first came over, either through working together or being friends of friends (who have now moved on).

The people! I miss having my family around, and constantly get pangs of guilt being so far from my parents. I’ve WhatsApp groups with my friends and try to keep up to date, but it’s just not the same. I’m lucky I have made it home most years, but it’s never enough. When I am home I often find myself sitting quietly in the pub watching my friends chatting away and soak it all in. I know that the life I left behind is not there anymore, and if I was to return it would be to a different world.

Would you recommend Auckland to others?

Auckland is expensive. I hear stories about Dublin, but Auckland is much the same. That said, the way of life is a step up. We have summers, actual summers with weeks without rain, you are never more than 30 minutes away from a beach, there are countless cafes, winerys and activities, and that is before you go and explore the rest of what NZ has to offer. For me, Auckland and New Zealand has been amazing, I’ve settled down with a Kiwi girl, bought a house, and even have a dog (Ted Crilly). I’d recommend New Zealand to anyone, if only it was closer to home, and not just because it means watching football in the middle of the night.