‘When I moved here four years ago, I quickly felt Dublin was my spiritual home’ 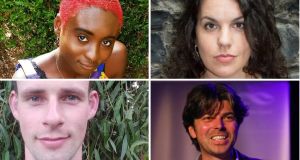 Poets Chiamaka Enyi-Amadi, Erin Fornoff, Ciaran O’Rourke and Adam Wyeth will participate in ‘Ulysses in Distant Lands’, an evening of poetry and song, at Epic for Bloomsday.

James Joyce’s Ulysses was a recreation of the sights, sounds and smells of a Dublin that was passing out of existence even as Joyce wrote about it between Paris, Trieste and Zurich. The story of Odysseus is that of a man striving to come home; and when he does, struggling with the new reality that faces him there. Not only has his home changed; he has been irrevocably changed too by his experiences in strange and distant lands.

Home as a romanticised concept can be a dangerous thing - a moment frozen in aspic which fails to reflect reality, an indefinable standard against which dull reality will always pale. But it can also be a positive ideal, a life-raft for those far away from their place and people, and a treasure trove of culture, nurtured by the carrier, and blossoming in a new place.

Irish emigrants such as Francis O’Neill, the Chicago chief of police who collected and preserved thousands of traditional Irish airs in the wake of the famine, have safeguarded that culture for generations to come. Jonathan Swift, another Irish emigrant, created one of the most famous odysseys of modern times in his Gulliver’s Travels, a keen satire on the politics of the day which uses a journey to distant lands as its central metaphor.

And emigrant writers such as Elizabeth Bowen and Maeve Brennan have preserved an important glimpse of the contemporary life of an Ireland that was, and that holds many lessons for generations to come.

This Bloomsday at Epic, The Irish Emigration Museum in Dublin’s Docklands, we’re exploring the concept of home - how we take it with us wherever we go. In advance of ‘Ulysses in Distant Lands’, an evening of poetry and song, we’ve asked some contemporary poets from Ireland and further afield to tell us what “home” means to them.

Like Homer’s hero Odysseus, my journey home has spanned around 10 years. My odyssey has taken me away from my birthplace in Lagos - the sprawling metropolis of Nigeria where I grew up in harmattan haze of late-90s, early 2000s - and brought me here to Dublin, Ireland.

Now at 21 years old, I visit my birth-place often through music and memory, out of the necessity of nostalgia. During painful flare-ups of homesickness I experienced in adolescence, I would imagine Lagos as a pubescent body growing into her oily new skin and outgrowing dusty old clothes. Choosing instead to shroud herself in black overalls one day, then sparkling in rainbow sequined dresses the next. From Egungun masquerades to Winners’ Chapel crusades, Lagos is indecisive, all-knowing and nonchalant; bearing testimony to Ancestry and Ascension.

Nigerian artists have long penned catchy homages to juxtaposing luxury-urban cityscapes and dark underbelly slums of Lagos. From Fela Kuti’s Monday Morning in Lagos, to Wizkid’s Afrobeats anthem Ojuelegba; the cyclical narrative of life in Lagos - “party, then hustle, then party, then hustle” - resounds internationally. Though the city favours unpredictability over pattern, and only those who adapt at a similar pace thrive. I’ve spent 10 years maturing into my multicultural identity, and learning to love the complexities of my first home.

For as long as I can remember, my family and I have holidayed in one particularly green, largely overlooked, and, it must be said, often rain-sodden corner of north Leitrim, called Rossinver - near where my grandparents were originally from. Over the years, the smell and feel and sound of the place, damp and rich and rustling as these invariably are, have grown inside me so that it now seems both familiar (a home of sorts) and strange (a reminder of my own indelibly suburban upbringing).

Since the deaths of my grandparents, this sensation has become sharper - perhaps because my sense of access to the landscapes that formed them, and which they knew intimately (and even loved), now feels less assured. In some respects, I’m glad of this. These days, when I do go back, I find myself more attuned to the forms of loss and leavetaking (social, natural, emotional) that define a place. Through Rossinver, I’ve begun to understand something of what it means, and what it costs, to belong.

When the Blue Ridge Mountains get heavy rains, my dad sends me phone videos of the stream behind our house, with comments on how well it’s running. Or my mother and brother send me pictures of the black bears that come to sit in the garden and eat the neighbour’s garbage. The Blue Ridge, the easternmost range of the Appalachian Mountains (pronounced like “say it wrong again and I’ll throw an apple at-cha”), is the most beautiful place I’ve ever been. I find snatches of these mountains around Rathdrum in Wicklow, or on the way to Lismore in Waterford, or in Kerry when driving through a tunnel of trees. With their damp ground and endless greenery, long views and hidden pockets, they make something go still and quiet in me.

As a bit of a nomad - from Sussex, England originally - I have a few places inscribed upon my heart. But three places are particularly dear to me. The first is the mountainous village of Chimanimani in Zimbabwe where I met my partner, Paula McGlinchey; it is a place of staggering natural beauty. Second, would be a house set in the woods in Sussex, on the edge of Ashdown forest where I spent my formative years. Again the place is etched deeply in my heart because of the strong bond I had with a dear old friend there who was my mentor and surrogate father.

The third place is Ireland, which has been my home for the last 20 years. I spent the first 16 years in Kinsale and west Cork, where the landscape and people have influenced me deeply. Ireland is where I started taking writing seriously. I felt particularly welcomed by its generous community of poets, both in the county and city where so many great writers live. I’ve been living in Dublin for four years, and while it is not my native city there is so much that is familiar about it, not least, because it has been so richly captured by many of my favourite writers, particularly by Joyce in Dubliners and Ulysses. When I moved here four years ago, I quickly felt Dublin was my spiritual home.

It’s not the palatial gardens of The Taj Mahal,
or the great lakes and mountains of Donegal;
nor is it that paradise beach flung out at sea
listening to the gentle swell under a palm tree.

For me, it’s back in the heart of Sussex
where you and I pick out the white exotic
flesh of steamed langoustine from their pink shells;
eye-level with rhododendrons and bog asphodels

dipping their toes in the shade of the stream -
listening to your flamboyant expositions on dreams,
while tractors in the field peal strips
of gold and fold them like pastry into giant nuggets.

From behind my ear, you pick a love-in-a-mist
and begin to unfold each petal like a horologist
taking apart its multi-layered design,
then put it back together. Every time.

Jessica Traynor is deputy museum director at Epic The Irish Emigration Museum (epicchq.com) in Dublin’s Docklands. Tickets for Ulysses in Distant Lands on June 12th, featuring the above writers and music by Farah Elle, are €10 and can be purchased at epicchq.com/bloomsday-epic-ulysses-in-distant-lands