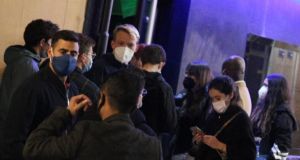 Nightlife: the queue outside one Madrid club. Photograph: Morgan Fagg

One afternoon not long ago, as I returned home from the school in Madrid where I teach English, a woman in transparent trousers passed me on the street. Then she walked into a nightclub. Closing time is 10pm, and a strict 11pm curfew means the Spanish capital then becomes a ghost town. Does it still have a nightlife? I returned a few hours later to check out the club but couldn’t get in – it was packed. The people on the door said to come back the next day at its new opening time: 4pm.

Ernest Hemingway, a man who liked his cocktails, is credited with remarking that “It’s five o’clock somewhere”; across from the square where he used to drink in Cervecería Alemana, two clubs were filling fast. When I tried to get in the next day I was told the same thing: full already. Then someone offered to bring me to another club.

They took me to a bar near another of Hemingway’s favourite haunts, La Venencia, a beautiful place that serves only sherry and doesn’t allow you to take photographs or give tips – a tradition, I believe, that dates back decades, possibly to the Spanish Civil War, when cameras weren’t allowed because bar owners didn’t want their customers to be photographed.

I was shown to a bar I had always presumed was a strip club. Inside, waitresses were showing a little more skin than I felt comfortable with: one had her face mask down around her chin; the other wasn’t wearing one at all

I was shown to a bar with big black windows that I had always presumed was a strip club. Inside, waitresses were showing a little more skin than I felt comfortable with: one had her face mask down around her chin; the other wasn’t wearing one at all.

It was quiet at first, so I had a drink in the corner as two girls beside me danced and shared a shisha water pipe and couples ordered cocktails. I had seen enough for one afternoon and left as the bar started to fill up. It would be a great place to spend some time if there weren’t a pandemic and a 10pm closing time.

Coronavirus has clearly hit many businesses hard. I recently went for a celebratory meal at Restaurante Botín, which Guinness World Records lists as the world’s oldest restaurant. (Founded in 1725, it holds the distinction because it still occupies its original building and has the same interior; other restaurants are older but have been through several incarnations.)

A friend’s father was its maitre d’ for 50 years; he met the crew of Apollo 11 and celebrities including Charlton Heston and Sylvester Stallone. Hemingway also ate there – Restaurante Botín is famous for its suckling pig – and wrote about it in his books. After a year of coronavirus it has only 18 staff, down from its normal 80.

Back home in Athlone, Sean’s Bar – Ireland’s oldest extant public house – is shuttered. Its customers are staying indoors. The people who are packing Madrid’s bars and clubs each day should be back in the safety of their apartments too

So perhaps you can’t blame nightclubs for doing whatever they can to survive, but seeing them open in the afternoon is a worrying sign of their priorities, and their customers’. Back home in Athlone, Sean’s Bar – Ireland’s oldest extant public house – is shuttered. Its customers are staying indoors. The people who are packing Madrid’s bars and clubs each day should be back in the safety of their apartments too.

Madrid has invested €2.7 million in 15 drones, so local police can monitor people’s movement outside their homes. It’s hard to see the logic of such a high-tech scheme when people are packing nightclubs in the early evenings and waiting staff aren’t wearing face masks.

People try to get around the rules everywhere. (I was surprised when a friend asked if they could copy my negative PCR test to get back to Ireland from Spain. We’re in trouble when strict public-health requirements are ignored like maths homework.) People also need to relax and enjoy themselves in these difficult times. But 4pm in the middle of an emergency isn’t the right time.