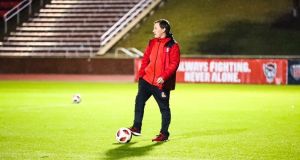 Stephen McKenna: ‘The amount of money we can play with is insane compared to college sports in Ireland’

Stephen McKenna knew early on he didn’t want to be a football player so, after getting a Uefa coaching licence at just 19, he was lured to the United States, where college soccer is in a different league.

McKenna was born and raised in Bangor, Co Down, and attended grammar school in Belfast before doing a BSc degree in sports studies at Ulster University in 2002. “During my time at university, I was a participant in the Business Education Initiative, where I spent a year at Newman University, just outside Philadelphia, Pennsylvania, learning business skills.”

After completing college in 2006, McKenna worked with a soccer company, running kids’ camps for hundreds of children in Georgetown University in the middle of Washington DC. “It was great. Kids’ soccer camps don’t come cheap in the US, costing up to €800 per week. It’s massive over here.”

After working in the US for the best part of two years, he came back to work with the Irish Football Association. “I was part of a programme that helped kids get their physical literacy curriculum. It was a great initiative, but in 2010 I wanted to move back to the US.”

McKenna volunteered in the women’s soccer camp at Georgetown University and got a job from the Dublin-born coach there.

“I was commuting from North Virginia to Washington each day, working with the women’s team.”

After two years he moved to Loyola College in Maryland to coach the women’s college team. “The college is expensive, with fees of around €60,000 a year, but in the US there are always sports scholarships available, which are highly sought-after, and kids can get into prestigious colleges with their sporting prowess.”

After three years at Loyola, McKenna settled in Raleigh, the capital of North Carolina. “I currently work as assistant coach at NC State University, a division one women’s soccer programme, which plays in the prestigious Atlantic Coastal Conference (ACC).”

“The ACC is the most competitive soccer conference in the country, producing 26 national title winners,” says McKenna. “Aside from training, my role with the team involves a lot of video analysis and scouting as well as recruiting. We are constantly on the lookout for top-quality players from all across the world to come play at NC State, so a big part of my job year round is to find players who can come in and replace the current squad when they graduate.

“The colleges make money from their basketball and American football teams, and it trickles down into other sports. Our college has a 65,000-seater football stadium for American football, while we train in a €35 million facility. On top of that, women’s soccer is heavily subsidised in the US.”

McKenna says that, unlike in many other states in the US, North Carolina is an affordable place to live and has many geographical benefits.

“You have the Appalachian mountains trail in the west of the state and beautiful beaches along the coast and, unlike many other places in the US, you can actually afford to live here. Now that I have a wife and four-year-old son, it’s a really good place to raise a family.”

The US is still accessible to anyone thinking of starting a life there, he says. “It’s important to network. Luckily there are lots of Irish people here in the college soccer arena, so they were a great help when I moved here.

“Americans are also unabashed when it comes to self-promotion so don’t be afraid to have confidence in your abilities to do any job or task given the opportunity.

“In terms of visas, I have been on several over the years, from J1 to H-1B and even an F-1 visa. I currently have a green card.”

Obviously, Covid-19 has affected the women’s soccer league and life in the US in general. “We follow very strict guidelines while we are in season with our team in order to try and get games this coming spring.”

“We have tried our best to create a bubble where our players will now, for the next 10 weeks, isolate with other players on the team and restrict what they do and who they see outside the team.

“I get tested three times a week and there’s a fast turnaround with results. The players know they are sacrificing a lot in order to play.

“I have found that no system has been perfect and, even with all the precautions, safeguards and testing, we have still had some players test positive with thankfully mild symptoms.

“Off the pitch my job has changed a lot. In previous years I would have travelled all over the country searching for new players. Now I watch games online and scout that way.”

McKenna says future plans are to some day be the head coach of his own programme, “preferably in the ACC so that I can continue to coach against the best in the country. I feel very lucky that I get to do a job that I love and I am thankful every day.”

As for coming home, before Covid-19 he tried to come home at least once a year. “I always tell people the best thing about living away from home is that you get to come back to it.”